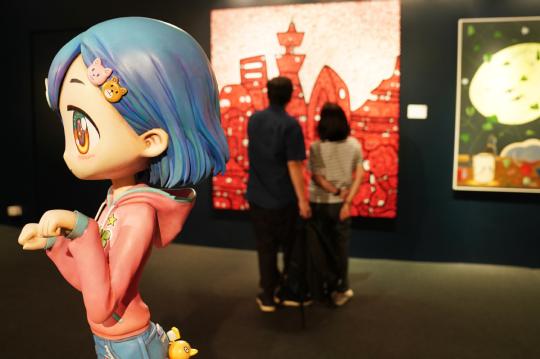 Sotheby's, a New York-based auction house, said it believes in the long run that China will remain the core market in Asia, and it will invest more in digital promotions and events to further boost its brand awareness online among the broader Chinese-speaking community.

The company said the COVID-19 pandemic has altered the business model in ways it has never imagined before, and as travel restrictions are still in place, the market would inevitably be affected when there is an outbreak in the nearby regions.

Sotheby's recently launched its official account on the Chinese social media platform Little Red Book, a move followed by many of its specialists as well, to build closer and more personal connections with its clients and target audience.

Meanwhile, since last year, the auction house has been livestreaming its global auction sessions on WeChat, Weibo and several other Chinese digital media outlets.

"Many Chinese modern artists are already well-established internationally, and they will continue to flourish in the global art market. Sotheby's will keep reaching out and connecting with clients in the region to understand their needs and bring them the most relevant and top-quality works at their demand," Felix Kwok, head of the department of Asia modern art in Sotheby's Hong Kong, said.

"Once the travel restrictions are lifted, we look forward to holding more live exhibitions and events on the Chinese mainland and other places in the region," he said.

During Sotheby's spring sales in Hong Kong this year, the company achieved a total transaction amount of $496 million, far surpassing its pre-sale estimates and establishing the second-highest total value ever achieved at Sotheby's in Asia. The event saw global bidding of buyers from more than 70 countries and regions, and witnessed strong participation of bidders from the Chinese mainland and the United States.

The sales series saw a combined sell-through rate of 88 percent and record-high participation of young bidders aged below 40. Generation Z collectors, or those who are aged below 30, also made their mark in contemporary art. Young bidders are also interested in Nike, handbags and accessories, and prestigious watches.

Due to the pandemic, Sotheby's has expanded its online auctions. Half of the spring season's new bidders were participating in online auctions, and online participants increased by 24 percent year-on-year at the company's live auctions in Hong Kong.

"Digital platforms continue to be a key area of client engagement, with unique visitor traffic to the company's website reaching an all-time high. Interactive virtual tours of the website attracted thousands of viewers in the lead-up to and during the sales," Sotheby's said.

China's modern masters have always been key players in the auction market. For instance, Chinese painting master Zhang Daqian's Mesmerizing Landscapewas established as the most valuable Chinese ink painting ever sold by the company, and it achieved the second-highest price for any artwork sold at Sotheby's Asia.

"Alongside introducing blue-chip Western works to Asia, we have been actively promoting Asian artists and their works to Western collectors. Behind every major Hong Kong sale, our team has been working closely with overseas colleagues," Kwok said.

"Only when our global specialists are well informed on these artists and their works, can they then provide the best recommendations to Western collectors, guiding them into collecting top-class Asian art," he said.

Meanwhile, Sotheby's said Vietnamese art resonates well with Chinese collectors, as one would often find Chinese cultural references in Vietnamese art. Almost 30 percent of bidders participating in the Vietnamese artworks offered in its Hong Kong spring sales were from the Chinese mainland, and many are bidders of the post-1970s generation.