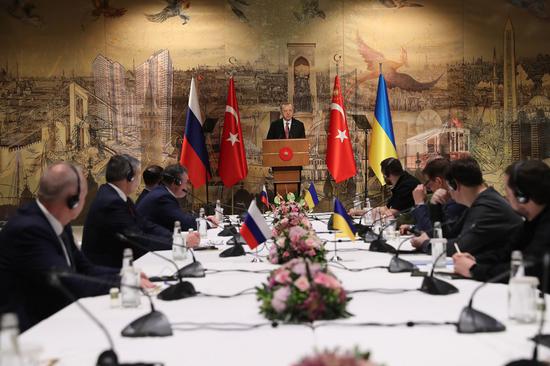 Turkish President Recep Tayyip Erdogan (C) meets with Russian and Ukrainian delegations before a fresh round of face-to-face peace talks in Istanbul, Turkey, on March 29, 2022. (Xinhua)

Turkey is to host a four-way meeting with the United Nations, Russia and Ukraine in Istanbul next week to discuss a possible Black Sea corridor for exporting Ukrainian grains, local media reported Tuesday.

A Turkish military delegation will travel to Russia this week to discuss the details of the planned corridor, the HaberTurk TV reported, quoting anonymous presidential sources.

UN Secretary-General Antonio Guterres wanted to attend the meeting, according to the sources.

The United Nations had appealed to Russia and Ukraine, as well as Turkey, to agree to set up a maritime corridor to export Ukrainian grains. Turkey, a NATO member, has been making efforts to broker a deal to allow Ukraine export grains to avert a food crisis.

Turkish President Recep Tayyip Erdogan and Guterres discussed the issue over the phone on Monday.

It is expected that the mechanism will become operational within one month and some 20 to 25 vessels will depart from Odessa port of Ukraine to sail across the Black Sea through the corridor, the Turkish presidential sources told the HaberTurk TV.

It is expected that some 30-35 million tons of agricultural products will be exported from Ukraine in six to eight months, the report said.

The plan is to open three corridors from four ports in Odessa of Ukraine. Kiev says clearing mines will take time so these corridors will come into operation to meet the urgent export of grains, HaberTurk reported.

Ukraine is a major grain exporter to Africa and the Middle East. As the Russia-Ukraine conflict drags on, the disruption to the Ukrainian grain shipments has led to sharp rise in food prices.