An engineer works at a construction site for the first phase of the Bozhong 19-6 Condensate Gas Field project in Tianjin. (Photo provided to China Daily)

Construction on a new project for the largest offshore natural gas field in the Bohai Bay area began on March 26.

The Bozhong 19-6 Condensate Gas Field is expected to generate more than 100 billion cubic meters of gas, enough to supply a city of 1 million for 100 years.

Discovered in 2019, the field has proven reserves of nearly 200 billion cubic meters of natural gas and over 149 million cu m of oil, according to a news release from CNOOC Offshore Oil Drilling, which is overseeing the project.

The first phase of construction is taking place in Qingdao, East China's Shandong province, and in the northern municipality of Tianjin.

It involves building a central operating platform, three drills and four pipeline frameworks, and will make use of 32,000 metric tons of steel, the equivalent in weight of a mid-size aircraft carrier. Eight underwater pipelines and three underwater cables will be laid, with a total length of 150 kilometers, said Ju Wenjie, the project's manager.

Ju said the project will make use of state-of-the-art technology and involve huge challenges, so the company has "mapped out strategic plans and upgraded safety and quality, in a bid to ensure completion on time".

CNOOC launched a test project soon after the discovery of the massive gas field. This entered service in October 2020 and is able to produce a daily peak natural gas output of up to 1 million cu m and 950 cu m of condensate oil. "The success of the test project gave us the confidence to undertake this new project. We expect to make further breakthroughs in oil drilling technology," said Hao Baoqi, vice-general manager of the drilling company's construction center, which is based in the Tianjin Port Free Trade Zone.

The first phase is expected to begin drilling for oil this November, Hao said. 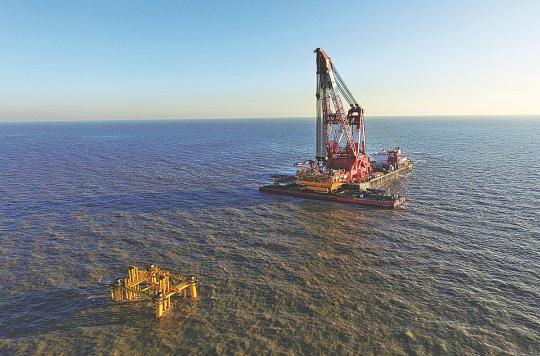 A view of the site of the first phase of the project in the Bohai Bay area. (Photo provided to China Daily)