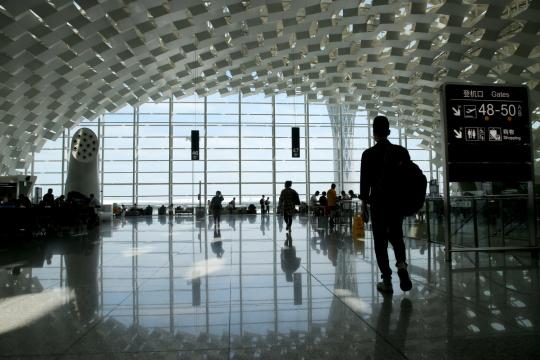 Passengers gather at a boarding gate in May at Shenzhen Bao'an International Airport in Guangdong province. (AN BAIMING/FOR CHINA DAILY)

China's civil airports handled 907.48 million passengers last year, 5.9 percent above the level of 2020, according to a statistical bulletin released by civil aviation authorities.

In 2021, a total of 17.83 million tons of air freight were handled. That represents a 10.9 percent increase from 2020, and surpasses 2019's mark of 17.1 million tons, said the 2021 civil airport production statistical bulletin released by the Civil Aviation Administration of China.

Twenty-nine civil airports registered an annual passenger throughput of more than 10 million each last year, two more than in 2020. These airports contributed 70.8 percent of the country's air passenger transport volume.

The number of airports with an annual passenger throughput of between 2 million and 10 million rose to 32 from 27 in 2020, contributing 18.5 percent of the country's air passenger transport volume.

The Yangtze River Delta, which handled 167.65 million passengers last year, ranked first among city clusters. Its 2021 figures represent a 4 percent increase from 2020, recovering to 63.1 percent of that in 2019.

The Chengdu-Chongqing Economic Circle came in second with 89.86 million passengers, followed by the Guangdong-Hong Kong-Macao Greater Bay Area and the Beijing-Tianjin-Hebei region.

As of the end of 2021, China's total number of civil transport airports reached 248. Among all civil airports, 174 airports, or 70 percent, registered growth in passenger throughput compared with 2020, and 39 airports even exceeded their levels for 2019.