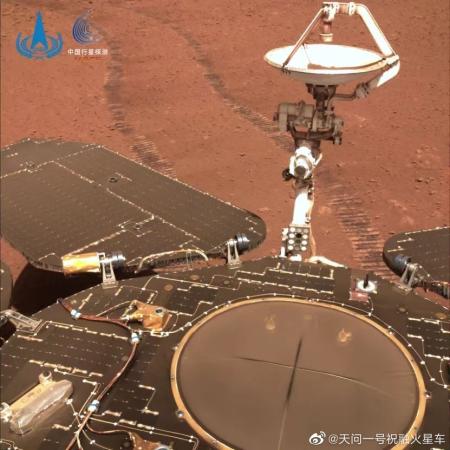 The rover also sent back a selfie from the Mars surface. Compared with the photo taken when it landed in May, the new selfie showed a thin layer of sand and dust on the rover's surface. The rover's telemetry information indicated that the power generation efficiency of its solar wings has been affected, but there is enough energy to allow the rover to continue its exploration.

As of Thursday, Zhurong has carried out missions on the Red Planet's surface for 306 Martian days, traveling 1.78 kilometers. Tianwen 1 has been in orbit for 609 days at a distance of 277 million kilometers from earth.

According to the China National Space Administration, sandstorms on Mars have directly affected the rover's energy access. The project team has continued to monitor Mars' dusty weather through the images captured by Tianwen 1, and it found that since late January, significant winds have been blowing and sand has been accumulating in the region north of 60 degrees latitude.

The northern hemisphere of Mars is entering its autumn season, during which there are frequent sandstorms. Scientists have not yet observed significant dusty weather in Zhurong's patrolling area.

Tianwen 1, the country's first independent Mars mission, was launched in July. The probe will continue its remote sensing exploration of Mars, focusing on obtaining high-resolution images of craters, volcanoes, canyons, dry riverbeds and other typical landforms.