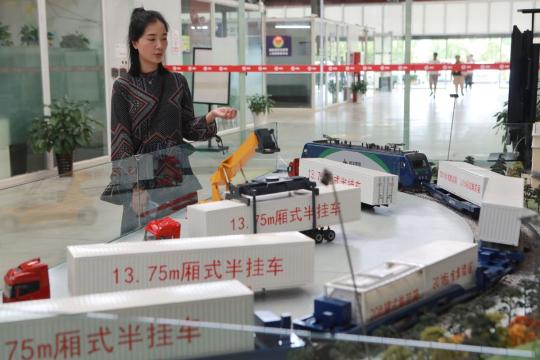 The display area in Manbang Group's headquarters in Guiyang, Guizhou province, demonstrates the company's application of big data in its freight service. (Photo/Xinhua)

Debuting shares of Full Truck Alliance Co Ltd, which operates a truck-sharing app in China, made a splash on the New York Stock Exchange on Tuesday with a surge of more than 13 percent from their offer price of $19, the top of the $17-$19 range.

Known as Manbang in Chinese, Full Truck Alliance's app connects fleets of driver-armed trucks with merchants that require shipping of their goods.

With its offer of 82.5 million American depositary shares (ADS), the company sought to raise nearly $1.6 billion from one of this year's largest IPOs in the United States by a Chinese firm. One ADS equals 20 ordinary shares.

The company, backed by the likes of SoftBank, Tencent, and Sequoia Capital China, saw its shares close at $21.5, representing a market value of about $23.6 billion.

In its prospectus filed with the US Securities and Exchange Commission, the Guiyang, Guizhou province-based company disclosed that it is the world's largest digital freight platform, reporting 173.8 billion yuan ($26.6 billion) in gross transaction value of goods and 71.7 million orders shipped through its platform in 2020.

Covering more than 300 cities in China, the platform－formed from the merger of truck-booking platforms Yunmanman and Huochebang in 2017－said it has attracted 2.8 million truckers to its service last year, with 20 percent of all heavy and medium-duty truckers completing deals via the site.

Despite a 4 percent rise in revenue last year to 2.58 billion yuan, the company continues to be in the red. Its net loss so far amounts to 3.47 billion yuan.

Full Truck Alliance also said it plans to use the IPO proceeds to invest in infrastructure, technology innovation and expanding its service portfolio.

China has the world's largest road transportation market with a market size of 6.2 trillion yuan in 2020, according to a report from China Insights Consultancy.

But the consultancy said gross transaction value generated from digital freight platforms now only accounted for 4 percent of total road transportation market, with its proportion set to increase to 18 percent, suggesting there is plenty of room for growth.

"They have transformed China's road transportation industry by pioneering a digital, standardized and smart logistics infrastructure across the value chain," said IPO advisory firm IPO Boutique in a note about the listing.

Full Truck Alliance's listing coincides with attempts by several Chinese companies to raise funds in the US in the second quarter of this year.

Among the high-profile Chinese corporates seeking a US listing are Didi Chuxing, the country's largest ride-booking service provider, and e-tailers Miss Fresh and Dingdong Maicai.