OTT takes to the skies with China's ARJ21 jet 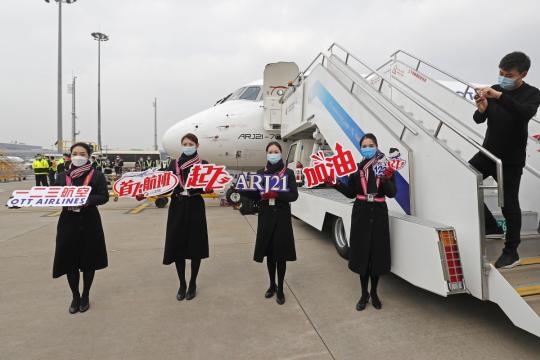 The company will be operating a Chinese-manufactured fleet of aircraft including the ARJ21 regional jet and the C919 narrow-body planes made by State-owned aerospace company Commercial Aircraft Corp of China.

Zhang Daqi, an experienced pilot who has flown six types of aircraft and has a flying time of more than 18,300 hours, was the captain of the maiden OTT flight.

The ARJ21 stands for Advanced Regional Jet for 21st Century. Like the C919 undergoing tests, the ARJ21 is a regional aircraft developed in accordance with international standards. The regional jets are equipped with state-of-the-art features and technology, according to Zhang.

"It attracts me in two ways. First, it is a lifelong pursuit of every Chinese pilot to fly a Chinese made aircraft, and second, every pilot who loves challenges and changes would like to fly the latest model," Zhang said.

Headquartered at Shanghai Hongqiao International Airport, the carrier is responsible for accumulating experience in the commercial operation of Chinese manufactured aircraft and supporting the nation's homemade jets to fly in a broader aviation market, said Liu Shaoyong, chairman of China Eastern.

The development of China-made aircraft needs the participation of the whole Chinese aviation sector. Going by the civil aviation development experience in other markets like the United States, there would be great potential for OTT Airlines and China-made aircraft, said Chen Zhuo, a senior analyst with China Merchants Securities.