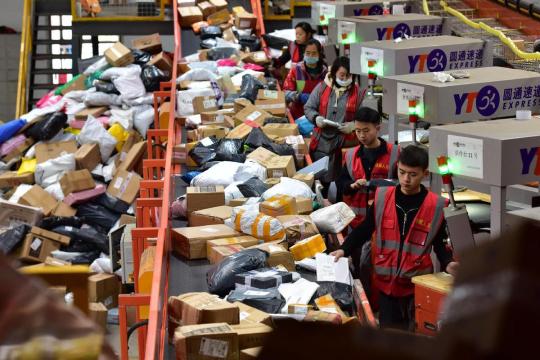 As China's largest e-commerce shopping spree－Singles Day－came to an end and the amount of packages delivered during the festival hit a new high, greener packaging is being planned and regulated by the government and adopted by delivery services.

Some 675 million packages were handled on Singles Day on Nov 11－the most ever for one day, according to the State Post Bureau, the country's delivery services regulator.

Along with the millions of packages, a great amount of wrapping is being used. Enterprises, governments and NGOs are making efforts to improve environmentally friendly packaging.

In June, the State Post Bureau released a guideline to regulate greener packaging. The guideline calls for using recycled and lighter materials and regulating the sizes and materials for boxes and tape. It also urges enterprises to set up recycling bins at delivery stations for the wrapping.

The bureau has promoted the use of slimmer tape and recycled wrapping, setting up bins to collect used wrapping such as boxes and bags, and has called for reducing repetitive wrapping for transportation.

"When a courier's recycling rate reaches a certain level, he or she will receive a reward, such as the title of 'Protector of the beautiful Earth'," he said, adding that financial rewards are also being provided.

Considering that one of the company's main businesses is to deliver mobile phones, which requires face-to-face inspection of the products, it is easier for the couriers to ask customers to return the wrapping after they open the boxes and inspect the product, Hu said.

But he also said that the company has discouraged face-to-face delivery during the COVID-19 pandemic, which has resulted in a decrease of recycled wrapping.

ZTO Express, one of China's major express-delivery companies, has promoted the use of recycled transfer bags.

According to the company, all packages handled by the company in Shanghai and Guangzhou, Guangdong province, are carried by recycled transfer bags. Those bags are expected to be used across the country by the end of this year.

ZTO has promoted the use of recycled bags containing a recognition chip, which enables the company to track the bags. More than 6.37 million such bags are being used.

Yu Baobiao, manager of Beijing's Nanluoguxiang station of JD, a major online retailer that also has a considerable share in China's express delivery market, said he encouraged couriers to ask customers to return the wrapping if they don't want it. It helps the customer because it means they don't have to throw the wrapping away, and the company can reuse it, he said.

Yu also mentioned that instead of encouraging customers to buy new boxes and bags for wrapping when they send packages, he urged couriers to ask customers to reuse wrapping.

"Customers preferring to shop online usually have plenty of used wrapping at home. When they send packages, I urge couriers to ask them to reuse the wrapping instead of buying new ones from our couriers," he said.

Last year, special green development plans were carried out by delivery enterprises such as JD, SF Express and Suning, according to a report released by the bureau's development and research center.

According to the report, which was released last month, 200 million wrapping boxes were reused last year, and about 43,000 new energy vehicles were making deliveries.

Although efforts have been carried out, more have been suggested.

The report, released on Nov 12, also called for enterprises to inform the public about the use of green wrapping and what other measures they are taking to reduce waste.