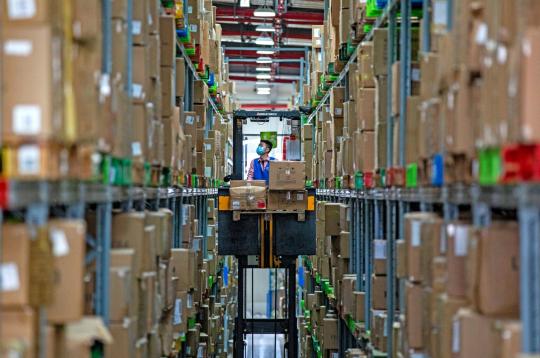 A worker sorts boxes of goods at a logistics center in Cixi, Zhejiang province, on Nov 4. Retail sales grew by 4.3 percent in October on a yearly basis as the economy's rebound accelerated. (Photo by Zhang Yongtao/For China Daily)

China's economic recovery is expected to increase its pace and offer stronger support for the world economy in the coming months, as indicated by rebounding domestic demand in October, officials and experts said on Monday.

The country's consumer purchasing and investment both staged the biggest expansion of the year, while growth in industrial production recovered to pre-COVID-19 levels.

Retail sales, a key barometer of consumption, grew by 4.3 percent in October on a yearly basis, up from 3.3 percent in September, the National Bureau of the Statistics said on Monday.

Fixed-asset investment in the first 10 months rose by 1.8 percent, up from 0.8 percent in the January-September period.

The recovery in demand has driven up production, with industrial output rising by 6.9 percent year-on-year last month, the same as in September and faster than the 4.7 percent for the same period of last year, the bureau said.

Fu Linghui, an NBS spokesman, said the reviving consumer market has helped the economy to recover in a more balanced and sustainable manner. "Economic growth may further accelerate in the fourth quarter of the year compared with the third and second ones."

Despite the rising risk of COVID-19 resurgence in some economies, China has proved able to contain imported cases while coordinating economic development, Fu said.

After posting 4.9 percent growth in the third quarter, China's economy should expand by 5 to 6 percent in the fourth quarter and achieve full-year economic growth of about 2 percent, with domestic demand further recovering while exports remain robust, experts said.

With COVID-19 largely under control domestically, recovery in offline consumption and services is set to pick up, said Tang Jianwei, chief researcher at the Bank of Communications' Financial Research Center.

According to the NBS, the surveyed urban jobless rate dropped to a pre-COVID-19 level of 5.3 percent last month. Offline services activity rebounded in October, with catering revenue nationwide resuming expansion for the first time this year and up 0.8 percent year-on-year.

The resilient domestic market will help anchor the global economy clouded by the pandemic, as China has vowed to make boosting domestic demand and opening its market wider among its priorities in the coming years, experts said.

The country will step up efforts to nurture a strong domestic market and promote win-win international cooperation by virtue of its vast market in the 14th Five-Year Plan (2021-25) period, said the communique of the Fifth Plenary Session of the 19th Central Committee of the Communist Party of China.

Huang Qifan, vice-chairman of the China Center for International Economic Exchanges, said the country is expected to continuously increase imports in the period, with total imported goods likely to surpass $22 trillion over the next decade.

"Such a huge market demand will definitely provide a direct, lasting drive for global economic recovery," he said at a forum co-hosted by ICBC International and Caixin on Sunday.

Despite the improving economic figures, the NBS said that "multiple challenges" still need to be conquered before a full recovery, as difficulties remain for some enterprises and industries like airlines and entertainment.