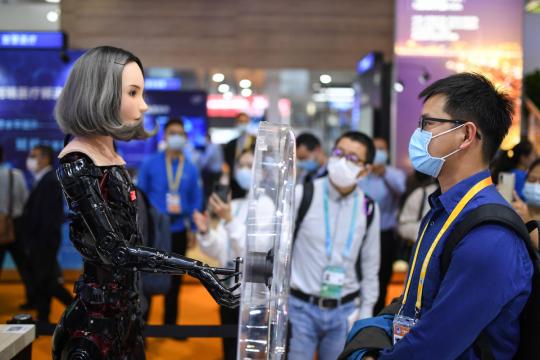 A visitor views a bionic robot at the booth of Microsoft at the Intelligent Industry and Information Technology exhibition area duringthe third China International Import Expo in Shanghai, Nov 6, 2020. (Photo/Xinhua)

Companies from Japan and the United States are showing greater enthusiasm for the China International Import Expo this year, with the number of their participants and exhibition spaces both notably growing, the event's chief organizer said on Sunday.

Of the various countries participating, Japan has the largest delegation of companies, and businesses from the US hold the largest exhibition area at this year's expo, Kong Fuan, deputy director-general of the CIIE Bureau, said at a news conference at the third CIIE in Shanghai on Sunday.

Despite the challenges created by the COVID-19 pandemic, Kong said, multinationals have been active participants in the event, showing strong recognition of the CIIE's important role and the huge potential of the Chinese market.

To prevent any chance of spreading the virus, he added, many exhibitors quarantined themselves before the expo.

Kong's remarks came after President Xi Jinping said at the opening ceremony of the expo that in hosting the third CIIE, China demonstrates its sincere desire to share its market opportunities with the world and contribute to the global economic recovery, and that the country will keep improving its business environment.

There are 674 exhibitors and 1,351 buyers from 64 countries at the expo, and 861 cooperation intention deals have been signed in the three days since it opened, Kong said, adding that hundreds of new products, technologies and service solutions will make their China, Asia or global debut at the expo.

More than 500 companies from 47 countries and regions related to the Belt and Road Initiative are participating this year, the bureau said.

Ker Gibbs, president of the American Chamber of Commerce in Shanghai, said the CIIE offers a great opportunity for the US companies, which want to cut deals to expand their market share in China.

Gibbs said the Chinese market is extremely important to most of the organization's members, and that China is one of the only large markets with growth right now, especially during the post-pandemic era.

KAI Group, a Japanese company focusing on marketing of products, including cutlery, kitchen utensils and beauty care products, doubled its exhibition area this year and brought popular beauty products to the expo.

"In the past three or four years, our sales in China have been growing at an average annual rate of more than 30 percent," said Hiroaki Watanabe, general manager of Shanghai KAI Trade Co Ltd.

"Since the outbreak of the pandemic, the sales volume of many of our products has increased, rather than decreased, in China, especially on e-commerce platforms," he said, noting his company has participated in the expo in the past two years and that it is creating more personalized products for the young consumers as part of efforts to seek a new growth point in the Chinese market.