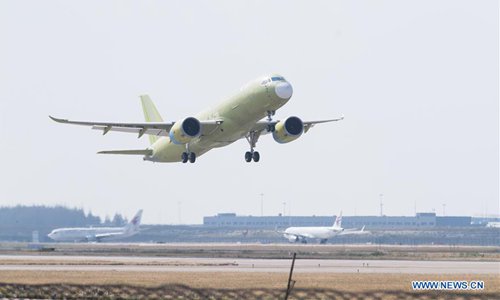 The development of the C919 narrow-body twinjet airliner is progressing as planned and in an orderly manner, said Wu Guanghui, National People's Congress (NPC) deputy and chief designer of the aircraft, on Tuesday.

Chinese aerospace manufacturer Commercial Aircraft Corporation of China (COMAC) has to date received 815 orders for the C919 from 28 domestic and foreign airlines.

Wu revealed that the CR929 plane is now in its preliminary design phase. The long-range wide-body aircraft was jointly developed by COMAC and Russia's United Aircraft Corporation. It has a basic range of 12,000 kilometers, three cabins and 280 seats.