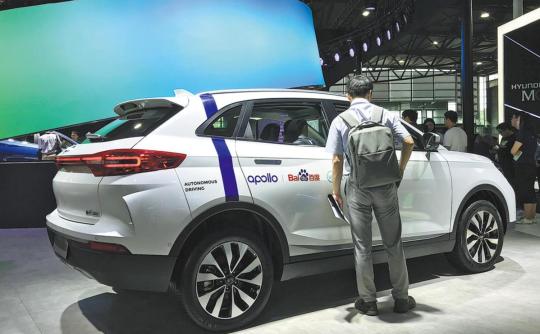 A visitor checks out a WM vehicle that sports Baidu's smart vehicle system at CES Asia in Shanghai in 2019. (Photo by Li Fusheng/China Daily)

China is expected to complete the formulation of a framework for driving-assist functions and low-level autonomous driving by the end of 2020, according to the Ministry of Industry and Information Technology.

The ministry released the goal on Thursday as part of several major tasks it will focus on this year.

The move is designed to further improve smart vehicle standards and pave the way for formulation of standards for high-level autonomous driving, the ministry said.

China unveiled an ambitious blueprint in February to develop its own standards for autonomous vehicles by 2025, covering technological innovation, infrastructure, legislation, supervision and network safety.

The country set a target to realize "scale production of vehicles capable of conditional autonomous driving and commercialization of highly autonomous vehicles in certain circumstances" by the end of the year.

The blueprint said China is expected to build a complete set of standards for autonomous vehicles between 2035 and 2050.

Autonomous driving is growing more popular in the capital market.

"Investors have realized that autonomous driving will be implemented on a large scale over the next three to five years," said Han Xu, founder and CEO of WeRide, a Chinese smart mobility company.

"They've also realized that it is no longer a high-risk investment and more capital is needed to expand business and boost technological stability."

Statistics from the China EV 100, an automotive think tank, show autonomous driving companies raised $3.5 billion in the first quarter of this year, up 34 percent from the same period last year.

Pony.ai finished a new round of funding in February, raising $462 million in investments, of which $400 million came from Japanese automaker Toyota Motor Corporation.

After its latest round of fundraising, Pony.ai has a valuation of over $3 billion.

The company is now providing an autonomous and contactless last-mile delivery service to customers in California, the United States. It is the first time the company has deployed its robotaxi fleet for the delivery of goods.

He added China has several advantages in developing the technology, including the vast market demand, diverse traffic scenarios and the reserves of professionals in artificial intelligence.

"If you look around, if you will find that China is the only match for the US in terms of AI-related human resources," Peng said.