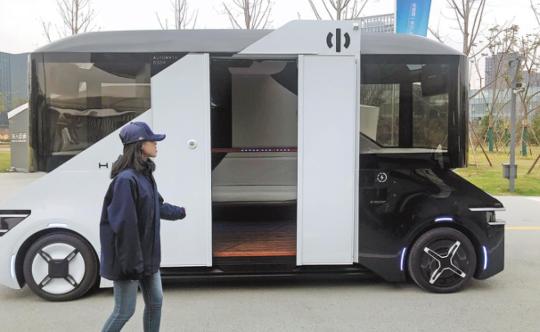 An autonomous bus developed by Human Horizons stops for passengers at a smart park in Shanghai in 2019. (Photo by Li Fusheng/China Daily)

Wu Gansha, founder of the startup established in 2016, told local media that 2020 will mark the start of commercializing autonomous driving.

Thomas Fang, a partner in the China office of global consulting firm Roland Berger, said China's new infrastructure plan will further boost the development of autonomous driving in the country.

"Five out of seven aspects in the plan, including 5G, have something to do with smart vehicles," Fang said. He estimates that robotaxis will be the most important business mode for autonomous driving in the passenger vehicle market.

"Chinese people's enthusiasm for robotaxis is growing, from 25 percent in January 2017 to over 30 percent in July 2019 in surveys," Fang said. Roland Berger estimates that by 2030 smart vehicles could account for 41 percent of fleet operators and government agencies' purchases.

"In China, we believe fully autonomous vehicles will see mass deployment in nine or 10 years," analysts at the company wrote in a research note last year.

It expected such vehicles could account for as much as 66 percent of the passenger-kilometers traveled in 2040, generating market revenue of $1.1 trillion from mobility services and $0.9 trillion from sales of autonomous vehicles by that year.

In unit terms, that means autonomous vehicles will make up just over 40 percent of new vehicle sales in 2040, and 12 percent of the vehicle installed base, McKinsey said.