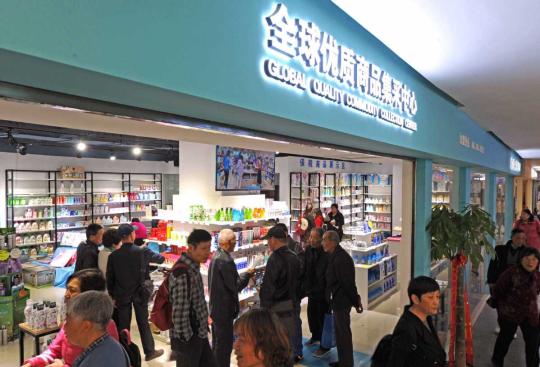 Customers shop at a brick and mortar store of a cross-border e-commerce firm in Yiwu, East China's Zhejiang Province. (Photo/Xinhua)

Cities in the Yangtze River Delta region will work together to construct a digital trade platform allowing cross-border e-commerce to play a vital role in driving economic development.

According to a guideline issued earlier this month, the region will speed up the construction of comprehensive cross-border e-commerce pilot zones in selected cities including Shanghai, Nanjing, Hangzhou, Hefei, Ningbo, Suzhou, Wuxi and Yiwu, which will work together to build a global digital trade highland.

In addition, new models, rules and standards of global e-commerce will be formulated to strengthen the construction of digital platforms and promote innovation in international trade systems, management and services.

This marks a substantial step forward in combining experiences from some of the region's major trial zones to see what possible synergies can be generated to form new best practices, said Petrel Tang, a partner at professional service firm PwC Strategy&.

"Shanghai has initiated the first nationwide FTZ, and its array of duplicable experiences in negative list, trade facilitation and financial innovation can be referenced by other cities," she said.

Meanwhile, other pilot zones can share their strengths in their respective areas of focus, such as in the field of cross-border online merchandise settlement, she said.

For example, Yiwu, a city in Zhejiang province known for manufacturing and exporting small commodities, is being highlighted in the guideline for its role in promoting free trade and helping Chinese products gain more exposure worldwide through digital sales channels.

The city has taken the initiative to join the so-called electronic World Trade Platform with Alibaba Group, with an aim of lowering barriers to global trade for small and medium-sized enterprises.

Under the agreement, the tie-up will focus on digitizing trade infrastructure and developing additional trade flows for the city. The venture will also focus on innovations in trade finance and establish a smart logistics hub there.

"The signing of the agreement shows that the two biggest markets, online and offline, are joining hands to create new trade rules, together with SMEs and micro businesses around the world," Lin Yi, secretary of the Yiwu Municipal Committee of the Communist Party of China, was quoted by Xinhua News Agency as saying in June.

This is likely to spark cooperation with other like-minded initiatives such as year-round exhibition of imported goods by Donghao Lansheng Group, under the auspices of the China International Import Expo.

Both physical and digital exhibitions have gone online to connect merchants and buyers via logistics, custom clearance, foreign exchange, insurance and payment services, according to company chairman Wang Qiang.