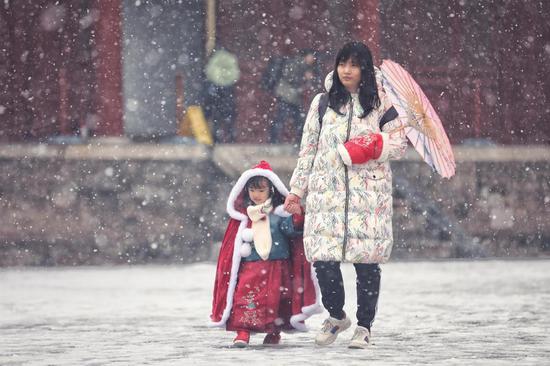 With North China blanketed by snow on Sunday, precipitation is expected to be of a much wetter variety over other parts of the nation until Thursday, said the National Meteorological Center.

Snow or sleet began falling in the Inner Mongolia autonomous region, Beijing and Shanxi province Sunday evening. On Monday, heavy snow snarled commutes in Jilin, Heilongjiang and Liaoning provinces in Northeast China, with parts of the region expected to see snow accumulations of over 8 centimeters.

"This storm system will affect the most areas in China since cold weather began this season," said He Lifu, chief forecaster at the center, which issued a blue alert for heavy snow, the lowest in the four-tier warning system, on Sunday.

Snowfall disrupted traffic in many regions. By 5 pm Monday, snow had caused 1,559 flight cancellations and 1,429 flight delays across China, according to Vari-Flight, a commercial airline information portal. Several highways in Inner Mongolia and Beijing were also closed due to weather conditions.

In Beijing, where snowfall tapered off around noon on Monday, at least 50 outbound and 66 inbound flights had been canceled at Beijing Capital International Airport as of 2:30 pm, the site said.

Twenty-nine bus routes had been altered or suspended as of 10 am due to snow and icy road conditions, the local commission of transport said. According to Beijing Subway, sections of the system, including Line 5 and Line 13, lowered operational speeds due to the weather.

More than 50,000 sanitation workers and over 6,500 snow removal vehicles were mobilized to ensure road safety.

According to the center, snow will continue in many regions but taper off midweek. Small or moderate snow and sleet systems will move toward West and Central China, including the Xinjiang Uygur autonomous region and the provinces of Gansu, Sichuan, Shaanxi, Hubei and Hunan. In Sichuan and Chongqing, heavy rainfall is expected.

"Warm humid air moved from the south and mixed with colder air in the north, producing warm wet air masses. Meanwhile, two cold air systems from the north of Xinjiang and Siberia, Russia, converged with these masses, causing large-scale snowfall," the center's He said.

He added that during the ongoing snowfall, visibility will be poor and temperatures in the north and northeast could drop by about 10 C.

"During the snow, cold air in the north will also head further south, leading to rainy weather in the south for about a week," he said.

From Monday to Thursday, light to moderate rainfall is expected in the southwest and the middle and lower reaches of the Yangtze River.

Heavy rainfall will hit parts of Hunan and Jiangxi provinces and the Guangxi Zhuang autonomous region on Wednesday.