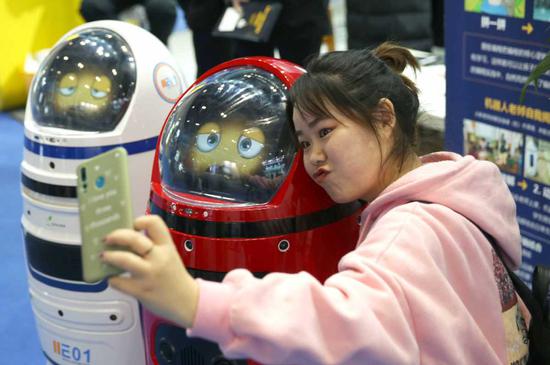 A visitor poses for photographs with smart education robots during a high-tech exhibition in Beijing. （Zou Hong/China Daily）

E-commerce, retail, finance among sectors that have gained big time

Corporate China is embracing in-depth digital transformation, and has led the world in the digitalization of consumer-oriented products or services, backed by its strong market vitality and large talent pool, experts said.

In 2005, the country contributed only 1 percent to global e-commerce sales. But, by last year, that figure skyrocketed to 46 percent, according to McKinsey research. The penetration of mobile payments in China is three times higher than that of the United States, it said.

Seong said China has a large market for digital consumption with its 850 million netizens and over 200 million "data natives"－those 25 years old or younger, who were born and grew up with the rapid development of the internet. They are more willing to pay for new digital services.

Besides, piles of digital companies spring up every year, which creates fierce competition and cutting-edge innovations. The government also provides free space for companies to make early-stage market trail, all resulting in the boom of the digital economy, he said.

"It is no secret that digitalization has become one of the main arteries powering the pulse of the global economy and also a strong driver of the ongoing, comprehensive transformation of China's economy," said Wang Yanping, general manager of public affairs at LinkedIn China, an online social network for professionals. He was speaking at the release of a report co-published by the School of Economics and Management of Tsinghua University and LinkedIn China in October.

Digital transformation of industries can also be reflected in talent flow from information and communications technology (ICT) industries to various fields, according to the report.

"This is a promising indication that digitalization is expanding into traditional industries beyond ICT," said Chen Yubo, Party chief of the School of Economics and Management of Tsinghua University.

Shanghai and Shenzhen are among the world's top five most attractive cities for digital talent, together with Dublin, Santiago and Bangalore, the report showed.

The scale of the digital talent pool in the Beijing-Tianjin-Hebei region, the Yangtze River Delta and the Guangdong-Hong Kong-Macao Greater Bay Area－three major city clusters in China－has also grown rapidly in recent years, though the proportion is still relatively low at around 20 percent, compared with other overseas regions with developed digital economy like the Boston-Washington city cluster, the San Francisco Bay Area and Bangalore, it said.

Industries with the largest proportion of digital talent in the above three Chinese city clusters include manufacturing, finance and consumer goods, which conforms to the orientation of industrial development of the regions, Chen said.

Besides, China's digital transformation has also begun to shift from the consumer side to the supply side, as more digital talent is hired by traditional industries, the report showed.

"The continued growth of the digital economy remains primarily dependent upon the digital transformation of traditional industries, and this part of the integrated digital economy has also become the driving force behind China's economic growth," Chen said.

Jia Jin, head of the technology group at Accenture China, said digital transformation is also of key importance to companies to survive in the fiercely competitive market.

The automobile industry, for example, experienced an overall drop in sales in the Chinese market last year. But, three companies－SAIC Motor Corp, BYD and Geely－saw an over 20-percent increase in revenue in 2018, thanks to their effort to adopt digital tools in production and marketing, he said.

"Digitalization helps reduce costs, improves clients' experience and helps brands to differentiate themselves from their counterparts, which helps revenue to grow," Jia said. "It's possible for any company to become a leader in its industry if it advances in digital transformation."

He suggested companies should incorporate a comprehensive digital strategy in their operations from marketing and supply-chain to product design and production, to provide differentiated experiences to consumers.