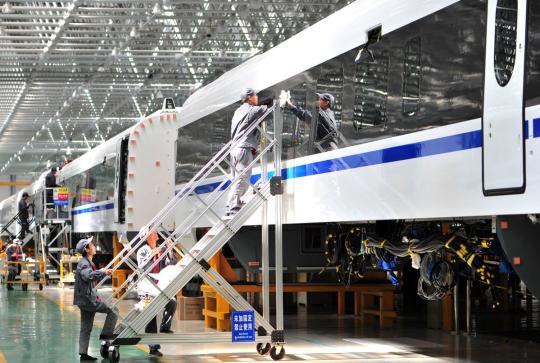 Since then, 13 more satellites have been put into orbit.

"We have significantly improved satellite service levels, including the ability to revisit any location in the world within a day and complete a general nationwide probe in one month," Jia said.

The resolution capabilities of the satellites have also improved greatly, while the weight of the latest satellite is only 40 kilograms, making it one of the lightest in the world, he said. The technological advances of the Jilin 1 are representative of the province's innovation-driven growth strategy in recent years as it moves away from its old industrial base.

Other innovations in the province include high-speed and subway technologies for the rail sector.

State-owned railway equipment manufacturer CRRC Changchun Railway Vehicles has developed the Fuxing high-speed trains that boast top speeds of 350 km/h and a maglev rail system, and is firmly placed as a global innovator in the sector.

"We have founded a large research and development team including more than 2,700 researchers," he said.

CRRC Changchun's achievements include groundbreaking research and applications relating to train materials and components, such as the upgrading of carbon steel mass transit vehicle body parts to stainless steel ones. It has also applied carbon fiber manufacturing techniques to subway vehicles.

The company's next-generation subway project has unmanned driving functions, which have met initial industry requirements from the Ministry of Science and Technology, according to Yu.

CRRC Changchun is the major subsidiary of CRRC Corp, the world's largest train maker which is based in Beijing. The subsidiary, based in Jilin, is the first Chinese railway equipment manufacturer to expand overseas, achieving record numbers of exports of vehicles.

More than 9,000 vehicles have been delivered to 22 countries and regions, including Australia, Brazil, Saudi Arabia, Singapore and the United States, with a cumulative export volume of $12 billion, according to the group.