Steel company forges ahead with innovations 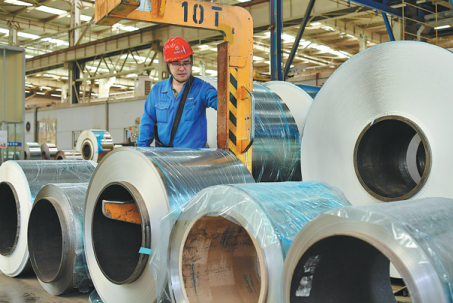 A worker moves rolls of inox strips at a factory of Taiyuan Iron&Steel (Group) in Shanxi province.

In the Shanxi factory of manufacturing giant Taiyuan Iron &Steel (Group), strips of thin, flexible stainless steel are being rolled up in preparation for shipment.

TISCO is the first Chinese producer of inox, a steel alloy containing a minimum of 10.5 percent chromium, which is different from heavier and thicker steel products.

The inox strips are only 0.02 millimeters thick and 600 mm wide. Inox, also called "hand-tear steel", can be applied in a wide range of areas such as aviation, new energy and foldable screens.

Wang Tianxiang, general manager of Shanxi Taigang Stainless Steel Precision Strip, a subsidiary of Taiyuan group, said earlier this year that in the past only a few countries, such as Germany and Japan, could produce steel sheets as thin.

During a recent visit to TISCO, Lu Yaohua, executive vice-chairman of the China Federation of Industrial Economics, said that after 85 years of development, TISCO has grown into a global leader in the stainless-steel industry. Lu said the company was effectively driving the overall sustainable development of China's steel industry, which is the "result of independent innovation".

"Before they were created, our team had undertaken more than 700 experiments with numerous failures," Liao said.

"Now our products are only 0.02-millimeter thick, but the international standard is set between 0.05 and 0.5 millimeters. Our technologies are leading the world."

The steel strips are sold in grams, which is in stark contrast to other steel products that are usually sold by the metric ton. An inox strip the same size as an A4 sheet of paper can sell for up to 400 yuan ($58).

According to Liao, TISCO produced 24,000 tons of steel strips last year. But inox is not the only innovative product driving the company's profits. According to TISCO, high-end product sales last year accounted for 85 percent of total profits.

"We are ramping up efforts to make Taiyuan Iron &Steel a top-level manufacturer in advanced steel products worldwide," Gao said in earlier reports.

"We have been optimizing company structures, encouraging tech research and development in partnership with top institutes and research centers, and enhancing staff training systems. The outlook is bright."

Another manufacturing giant in Shanxi, Taiyuan Heavy Machinery Group, is also stepping up development of high-end product manufacturing to improve its global standing.

Last March, Taiyuan Heavy Machinery Group made 41,180 wheel units for railway trains. According to the group, they were produced in record time for the rail-transit manufacturing sector, with the achievement closely related to the company's developments in artificial intelligence.

"We are stepping up the development of technologies to make our company a first-class manufacturer worldwide. We hope to lead the country's manufacturing companies to climb up the global value chain," chairman Wang Chuangmin said.

The company has sold cranes, excavators, and other products for the transit-rail sector to more than 50 countries and regions. More than 50 percent of its products are exported.

Zhou Minliang, an economist specializing in regional economies at the Institute of Industrial Economics, said Shanxi's initiatives in high-end manufacturing were an effective way for the province to achieve high-quality development.

"In the past, Shanxi's economic development was heavily reliant on the coal industry, which would not help the province achieve sustainable development because coal is considered a non-renewable resource and the industry causes pollution," Zhou said.

"But Shanxi's rich energy resources give it an edge in developing manufacturing. The province is also launching a series of favorable policies to foster a good business environment. Meanwhile, China's demand for high-end manufacturing is huge," he added.

Zhou said the development of related industries and the establishment of an industrial chain are vital to Shanxi's advancement in manufacturing.