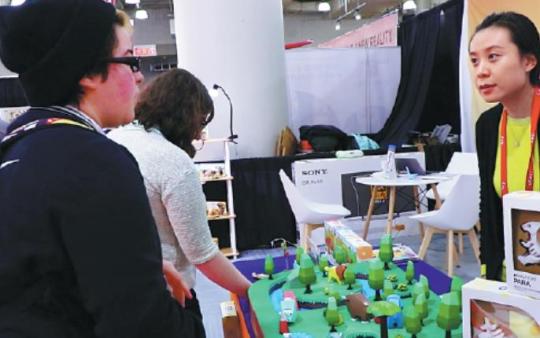 Floating jauntily and high above a restaurant area in the United Arab Emirates' Dubai Mall recently was evidence of the new-found confidence of Chinese makers of kids products like toys, games, educational content, related hardware and software.

At the world's largest mall in terms of number of shops, a made-in-China zeppelin sports a restaurant's logo. What makes this high-tech flying object distinctive is its ability to stay still or hold its course, unlike similar balloons that sway in the direction of the wind.

The remote-controlled balloon wowed the cosmopolitan crowd of onlookers at the Dubai Mall. But they are not the only ones who are impressed with such Chinese products.

Across the world, buyers are lining up for made-in-China toys, miniature airplanes, dummy sharks, tank models and armored vehicle replicas. These creative products transform into robots as they scoot around.

Both children and adults there love these products - some of them can't get their hands off their remotes, Li said.

According to Beijing-based China Toy &Juvenile Products Association, China exported $25.08 billion worth of toy products in 2018, up 4.5 percent year-on-year.

These include both traditional plastic and wooden toys, and high value-added toys, but exclude video game products. The main export markets were the US, the European Union, India and the Middle East.

China also imported $649 million worth of toy products from global markets in 2018, up almost 16 percent year-on-year.

China is the world's second-largest toy consumption country behind the US. The CTJPA said the recent sales decline in the global toy market has prompted more companies to actively develop their China market strategy.

According to a survey of 20,000 consumers by the CTJPA in late March, more than 65 percent of the respondents are planning to increase their spending on toys this year.

"Despite sluggish conditions in traditional pillar markets such as the US and many European countries in recent years, notable growth came from India, Africa and South America. This has somewhat offset tardy progress elsewhere," Li of the GTA said.

That should bring joy to more than 10,000 Chinese toy manufacturers that employ over 5.8 million workers and produce about 75 percent of the world's toys annually, Li said.

Many of them are rising up the value chain. There was a time when they were no more than contract manufacturers. Now, they are evolving into designers and makers of branded products.

HZTMC, a producer and developer of airplane miniatures and kids hobby products, is now co-branding over 10 products in international markets. Its partners are from Spain, Portugal, Australia and the United Kingdom, according to Tong.

The company intends to phase out co-branding in the next few years, Tong said, "Many customers want to cooperate with us only as OEMs, but we don't want to remain confined to OEM deals alone."

It employs over 200 staff, including more than 30 researchers and engineers, Tong said. It is planning to hire more foreign professionals this year.

Max Wong, regional sales supervisor with the international business division of Rastar Group from Guangdong, a toy-maker, said that about half of its sales come from international markets.

Rastar has had a presence in the European and Asian markets for several years. It has just made inroads into the American markets, Wong said.

Listed on the Shenzhen Stock Exchange since 2010, Rastar received exclusive rights to produce BMW car replicas in 2006. It also exports its self-branded products, according to Wong.

"Co-branding is just the first step for sustainable development of Chinese toy companies and it is more important for them to have their own brands in international markets."

China's toy industry is a buyers' market and it is hard for a toy factory without self-owned research and development capacity to refuse OEM partnerships with overseas customers, said Tong.

Every year, many international big toy brands identify new products in China, buy them out and label them under their own brands, which are then tweaked or customized with distinct packaging, Tong said.

Chen Jinlin, a consultant to the Yiwu Christmas Goods Industry Association in Zhejiang province, said prices and sales of traditional Christmas products, including artificial Christmas trees, cushions and stuffed Santa toys, saw a decline over the past three years.

"Even though OEM operations helped the industry to develop, its low added-value limited further development," he said. "Capable companies in Guangdong, Fujian, Jiangsu and Zhejiang provinces already have their own brands. China's cultural elements and fast-growing digital technologies will also add more value to these brands."

After years of development, he said sales of new and high-tech products including electronic and educational toys are surging at the Yiwu Small Commodities Market, the country's largest small commodity market by sales revenue.

Many Chinese manufacturers have overcome challenges like lack of the necessary technology and equipment during their early days, which hindered their passage to export markets where safety standards were high.

Rising labor and raw material costs at home forced them to upgrade their technologies and equipment with the help of foreign partners. At that time, there was no competition, just cooperation, Chen said.

"For a very long period of time, the 'made-in-China' tag came to signify cheap and low-value products," he said. "With technology improving electronic and digital toys, the global market might have a new view on Chinese products.

"Companies can ride the rising demand to focus on other high-tech, value-added products. Domestic toy manufacturers' competitiveness reflects not only in their price labels today but in their development capacity as well as intellectual innovation."

Zhao said the domestic market, and the world's cartoon and animation industry, can offer more market potential to boost the country's toy sales.

The next step should be deployment of more resources into the development of creative toys and games, to further compete with globally established competitors. This is important because many parents think creative toys and games can help their children develop mental skills and have more fun, said Zhao Ying, a researcher at the Institute of Industrial Economics, which is a part of the Chinese Academy of Social Sciences in Beijing.

"Research has also shown that children who often play games requiring imagination and creative work are better able to adjust their moods and solve problems," he said.

Game scenarios where children imagine themselves as adults in certain careers could foster their interest in music, software, sports, performing arts, or fine arts, and can better shape their personalities, he said.