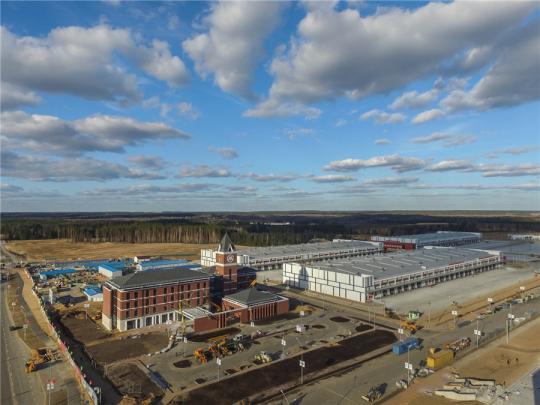 An aerial view of the China-Belarus Industrial Park. Located 25 km from Minsk, Belarus, the park has attracted global investors and extended its influence to nearby regions. (Photo/Xinhua)

By the end of February, 43 companies were registered with the park and had signed agreements to make total investments of more than $1 billion, compared with 23 companies at the end of 2017. Among them, 14 had already started manufacturing and providing services.

Li Haixin, director-general of the China-Belarus Industrial Park Development Co, said construction of the first phase of the industrial park, spread over an area of 8.5 square kilometers, can be completed in 2020 and it can then host 70 to 100 companies, signing investment contracts worth $2 billion to $2.5 billion.

"We are looking to attract high value-added high-tech companies capable of sustainable development, especially those firms that can fill voids in the Belarusian economy," Li said.

The target companies will be distributed in nine leading industries such as mechanical engineering, new materials, electronics and biotechnology, he said.

Meanwhile, the China-Belarus Industrial Park, also known as the Great Stone Industrial Park, is quickening its globalization pace. Among the 43 companies, 26 came from China, 10 from Belarus, and seven from other countries like the United States and Russia.

"We have been proactively extending our influence to nearby regions, particularly Russia and other European countries, which are major markets for the companies registered in the park," Li said.

Located 25 kilometers from Minsk, the industrial park, a territorial entity with an area of 91.5 square kilometers, is the largest intergovernmental cooperation project between China and Belarus. Adjacent to the Minsk National Airport and the Berlin-Moscow transnational highway, it is expected to become a major destination for emerging and high-tech industries.

Hu Zheng, CEO of the industrial park development company, said Belarus can better integrate into the global economy by drawing on the experiences from China's reform and opening-up, fully using its geographical advantages and enhancing degrees of marketization.

"At present, what is most important for Belarus is foreign capital, as well as advanced technologies and concepts, creating a conducive environment for foreign investment and attracting more investors to the country and the China-Belarus Industrial Park," Hu said.

In his opinion, the industrial park should become a demonstration zone for international practices.

China and Belarus have been cooperating to settle their differences in standards. Due to different building codes of the two countries, the initial design of the industrial park by Chinese architects did not meet certain Belarusian requirements.

Architects from both countries are now working together to better integrate their building codes and to reach a consensus on designs for residential housing, public works, factories and warehouses. It will be much easier for the designs to obtain regulatory approval in Belarus, said Su Lei, CEO of the joint Chinese-Belarusian design institute.