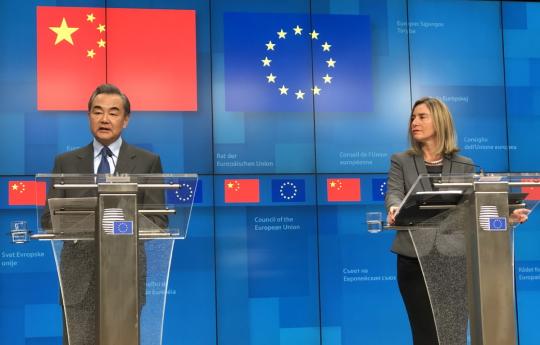 The upcoming European visit by President Xi Jinping will be a highlight of China's diplomacy with the European Union this year, State Councilor and Foreign Minister Wang Yi said in Brussels on Monday.

Wang, who is attending the 9th round of the China-EU High-Level Strategic Dialogue and meeting with foreign ministers of all 28 EU member states, said the fact that Xi chose Europe for his first foreign visit this year reflects the importance China attaches to Europe. Xi will make state visits to Italy, Monaco and France from March 21 to 26.

Wang said the signal sent by the visit is "clear and definite".

"No matter how the international situation changes, China always views the EU as an important strategic partner and always places China-EU relations in an important and high-priority position within its foreign policy," he said at a news conference with EU High Representative for Foreign Affairs and Security Policy Federica Mogherini following the strategic dialogue.

The two sides reached consensus in 10 major areas at the meeting, according to Wang, including support for multilateralism and role of the United Nations, promoting an open global economy, pushing for a rules-based multilateral trade system and strengthening the World Trade Organization. They also agreed on areas including supporting cooperation in tackling global challenges and international nonproliferation, promoting the 2030 Agenda for Sustainable Development and fighting all forms of terrorism.

Wang conceded that disagreements exist between China and the EU due to their different history, culture and development stage.

"Moderate and benign market competition will encourage both of us to be better, and will make China-EU cooperation more resilient and more dynamic," he said of the competition in trade and other areas.

Wang said he believes that the EU will benefit from the new round of reform and opening-up that is being rolled out. But he said China hopes its companies will also receive "fair, just and nondiscriminatory treatment" in Europe, clearly referring to some new EU measures in screening foreign direct investment, some of which are seen as targeting China and several other countries.

"While competition between China and the EU is hard to avoid, cooperation is still the mainstream and win-win is the goal," Wang said.

Mogherini said exchanges and cooperation between the EU and China have reached unprecedented levels.

"The European Union is committed to strengthening cooperation with China. China is a leading global power, economically, politically. And for the European Union (it) is a comprehensive strategic partner," she said at the news conference, calling Wang a "good friend" and someone with whom she has worked closely for about five years.