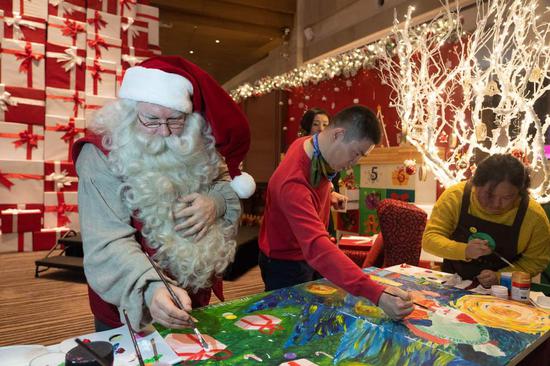 A certified Santa Claus from Finland makes his rounds at a Hyatt hotel in Shanghai bringing the festive cheer to guests. (Photo/chinadaily.com.cn)

From elaborate street lighting to snow globes the size of cars to a giant toy robot by jewelry brand Tiffany and Co, businesses around Shanghai have been ramping up their marketing efforts to lure customers ahead of Christmas.

In fact, one hotel has even engaged a certified Santa Claus from Finland to up the ante in novelty factor.

In the days up to Dec 25, this professional Santa will make his rounds at Hyatt hotels and its sister establishment, bringing the festive cheer to guests during various Christmas events.

On Thursday, at Hyatt on the Bund, the personality was part of an event held in collaboration with World of Art Brut Culture, a non-profit organization that provides art therapy courses for people with special needs.

The event was just one of the many around the city aimed at engaging with Chinese consumers during this festive period.

At the nearby Waldorf Astoria, the hotel has erected a shimmering two-story Christmas tree. At the Peninsula Hotel, the afternoon tea service has been changed for the festive period to include a range of Christmas pastries.

Over at the area around Huaihai Middle Road, decorative elements such as Christmas street lighting, snow globes the size of cars and a giant toy robot by jewelry brand Tiffany and Co. can be seen this year.

While Christmas is not a public holiday in China, industry players point out that the Chinese are nonetheless warming to the occasion.

"Christmas is a time of growing excitement here in China, especially among the younger generation. We see them visiting with family members to share a meal in our restaurants for example, and spending Christmas eve with friends having fun together in our VUE Bar," says Hyatt on the Bund General Manager Mark Foxwell.

Market research firms have also reported similar findings. According to a 2016 Mintel article, "urban Chinese consumers have adopted the Western tradition of giving boxed chocolates as Christmas presents", while the firm's China Festival Shopping Market Report released in January this year revealed that Christmas is "one of the biggest Western shopping festivals in China", with 53 percent of consumers having bought gifts for their friends and family.

The increase in sales of Christmas trees in China also point to a growing acceptance of the festival in the country. In 2017, Shanghai-based marketing and research firm China Skinny reported that some 600,000 Christmas trees were sold on Tmall, an e-commerce platform by Alibaba.

This year, the firm estimates that about 1.69 million trees worth 133 million yuan in revenue have been sold on the platform.

Chinese companies appear to be leveraging the festive spirit as well. Numerous domestic retailers on e-commerce site Taobao have kicked off Christmas sales, just days after the "Double 12" promotions on Dec 12.

Even gaming companies are getting in on the action. Tencent's massively popular PUBG Mobile recently introduced a Christmas theme to the game, adding elements such as snow, gift boxes, Christmas trees and snowmen.

"In the eight years that I've lived here, the tributes to Christmas have become a lot more polished, and on a much grander scale as brands have increasingly invested more in winning the market," says Mark Tanner, founder and managing director of China Skinny.

"There've been more domestic brands utilizing China as a way to promote their wares, and they have done it in a progressively more tasteful way. The rise of social media, Key Opinion Leaders and e-commerce has also seen Christmas-themed content and promotions fill smartphones screens. I feel that for consumers, at least in Shanghai, Christmas is less of a mystical novelty than it was eight years ago."

And it's not just retailers that are noticing the boom in sales. Those in the food industry have also been riding on the growing wave of the Christmas spirit.

Austin Hu, the chef who runs establishments like Madison Kitchen and Diner, says that December is usually the busiest period of the year for his restaurants.

"As for the Chinese response to Christmas, I think it's getting there slowly. It started, as it usually does, as a purely commercial exercise by the malls and retailers. But I think more and more Chinese people are now understanding the spirit of Christmas and all the positivity it entails. At the end of the day it should be about spreading joy and spending time with loved ones. I think anyone can get behind that," he says.

But while most people might think that Shanghai, as China's most cosmopolitan city, would be the most receptive toward Christmas in the country, Tanner points out that this is not necessarily the case.

"China Skinny has noticed that many lower tiered cities are embracing Christmas this year more so than Shanghai. An example is in Chengdu where the lighting of the Christmas tree appears to be a grandiose celebration at many of the big hotels such as Hilton, Waldorf Astoria, Wanda, Kempinski, complete with VIPs, children's choirs, elaborate Santas, and a host of delicate Christmas-themed foods," says Tanner.

"In the lower tiered cities, celebrating Christmas on a grand scale is a more recent tradition than in Shanghai, and therefore more of a novelty. Yet we've found most consumers have a limited understanding of its religious or cultural associations. Instead, consumers are simply viewing it as an excuse to party and shop in the void between Singles' Day and the Year of the Pig."