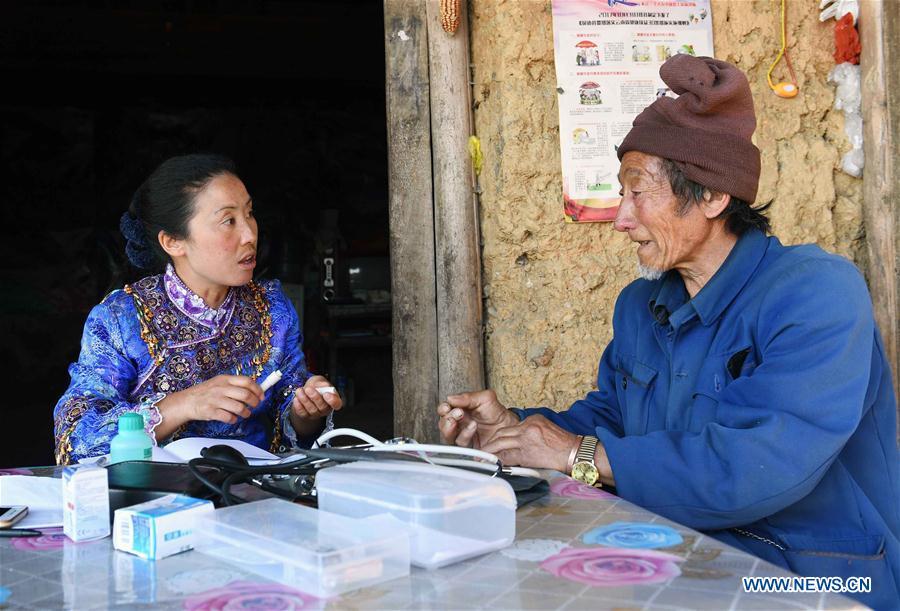 Doctor Yang Lianying of Miao ethnic group (L), a newly-elected deputy to the 13th National People's Congress (NPC), visits a patient in Dalujiao Village of Xinhua Township in Pingbian Miao Autonomous County, southwest China's Yunnan Province, Feb. 23, 2018. Yang Lianying has been the only doctor in Henan Village, which is located in remote mountain areas, for over ten years. As households are scattered over the village, Yang has to climb rough mountain roads to visit patients. Despite the hardship, she chooses to stick to her post and take care of the villagers. "Young people don't want to work in village, and old rural doctors can't meet patients' requirements." she said, "So the village faces a shortage of doctors." She wants to see more trainings and cultivation for rural doctors with better management. Even during the time Yang attends the NPC in Beijing, she still receives calls from villagers everyday asking her suggestions about medical treatments. In Yang's opinion, everyone's health matters. As a NPC deputy and a doctor, she vows to dedicate herself to the country's rural healthcare. (Xinhua/Yang Zongyou)