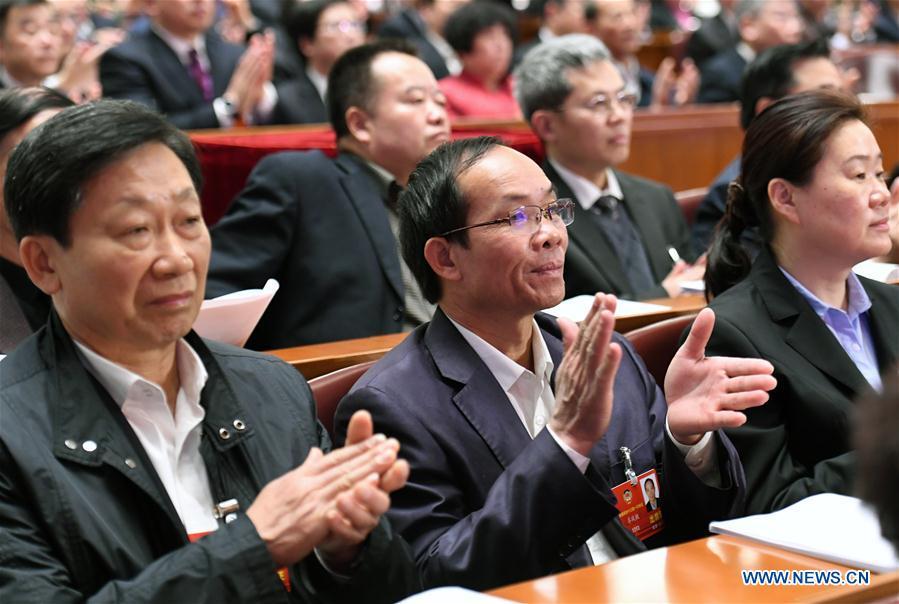 Yang Fengji (C, front), a member of the 13th National Committee of the Chinese People's Political Consultative Conference (CPPCC), attends the third plenary meeting of the first session of the 13th National Committee of the Chinese People's Political Consultative Conference (CPPCC) in Beijing, capital of China, March 10, 2018. Yang Fengji of Li ethnic group, is a village Party secretary in south China's Hainan Province. Yang has been dedicated to the work of poverty alleviation for almost 20 years. Since 1998, Yang has been making efforts to lead local villagers to get rid of poverty by planting rubber trees. In 2007, he established a cooperative with villagers to take advantage of rubber tree forests in raising chickens and pigs. Up till now, there are about 180,000 rubber trees in the village, covering an area of 5,100 mu (340 hectares). Thanks to animal husbandry and plantation, local villagers' annual per capita income rises to 9,000 yuan (1,423 U.S. dollars), a giant leap as compared to a mere 600 yuan (94.9 U.S.dollars) of 20 years ago. In 2016, Yang started to take charge of poverty alleviation work as the deputy chief of Da'an Township. He wants to develop eco-agriculture, rural tourism and e-commerce platforms to help local people increase incomes. Yang believes people are the key element for development. He plans to provide opportunity of knowledge learning and skill trainings to villagers, who hopefully can contribute more to the rural development in return. (Xinhua/Yang Zongyou)