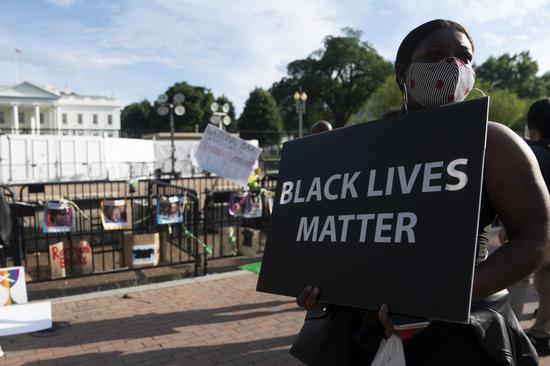 Two white men were sentenced to life in prison on Monday for the 2020 murder of Black man Ahmaud Arbery.

U.S. District Court Judge for the Southern District of Georgia Lisa Godbey Wood handed down the sentences against Travis McMichael and his father, Greg McMichael.

"A young man is dead. Ahmaud Arbery will be forever 25. And what happened a jury found happened because he's Black," Wood said.

A federal jury convicted the McMichaels and their neighbor William "Roddie" Bryan in February of violating Arbery's civil rights by attacking him because of his race.

All three were also found guilty of attempted kidnapping while the McMichaels were convicted of using guns in the commission of a violent crime.

The McMichaels armed themselves with guns and chased Arbery in a pickup truck after he ran past their home outside Brunswick, Georgia on Feb. 23, 2020.

Bryan joined the pursuit in his own truck and recorded a phone video of Travis McMichael shooting Arbery.

The McMichaels claimed they suspected Arbery was a burglar but investigators determined he was unarmed and had committed no crimes.

Greg McMichael addressed the Arbery family on Monday, saying that their loss was "beyond description."

"I'm sure my words mean very little to you but I want to assure you I never wanted any of this to happen," he said.

Outside the courtroom, Arbery's mother, Wanda Cooper-Jones, responded to his statement.

"I think he realizes that he made some horrible decisions," she said. "Unfortunately, his apology doesn't bring back my son."

Bryan is set to be sentenced at separate hearings later on Monday.

A Georgia state judge imposed life sentences for all three men in January for Arbery's murder.

The sentences on Monday came days after the U.S. Department of Justice charged four current and former police officers in Louisville, Kentucky for their roles in the 2020 fatal shooting of African American woman Breonna Taylor.

"Breonna Taylor should have awakened in her home, as usual, on the morning of March 13, 2020," Assistant Attorney General Kristen Clarke said last week. "Tragically, she did not. She was just 26 years old."

The indictments against the officers allege that Louisville Police Detective Joshua Jaynes and Sergeant Kyle Meany drafted and approved what they knew was a false affidavit to support a search warrant for Taylor's home.

That false affidavit set in motion events that led to Ms. Taylor's death when other officers executed that warrant, according to Clarke.

The killings of Arbery and Taylor fueled racial justice demonstrations across the United States after the murder of African American man George Floyd by a white police officer in Minneapolis, Minnesota in May 2020.