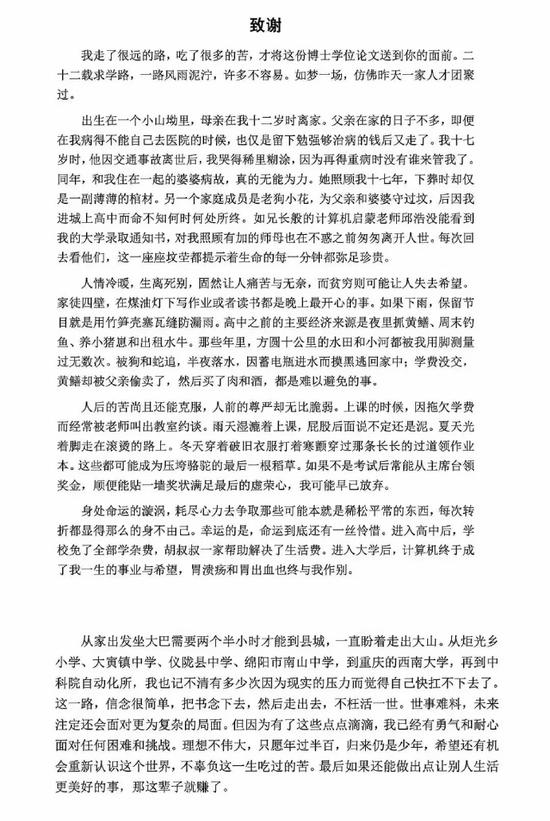 A screenshot from the acknowledgements of the doctoral thesis of Huang Guoping, a graduate of the University of the Chinese Academy of Sciences. [Screenshot from Sina Weibo]

Recently, an acknowledgements section from a doctoral thesis has gone viral. The author reviewed his bumpy, challenging road to reach this point, which touched a large number of netizens.

"I have come a long way and endured a great deal of hardships to present this dissertation before you. During 22 years of study, the road has been a rainy and muddy one. It was not easy getting here," the author, Huang Guoping, of the University of the Chinese Academy of Sciences, wrote at the beginning of his thesis.

In the thesis, he mentioned he was born in a mountainous area and his mother left home at 12. His father died in a traffic accident when he was 17, and in the same year, his only remaining family member -- his grandmother — passed away.

"I cried so hard, because I knew if I get seriously ill, no one could take care of me."

Living an utterly destitute life, he said before high school his major income was catching eels at night, fishing on weekends, raising piglets and renting buffalo.

"At that time, doing homework or reading books under the kerosene lamp was the most enjoyable part of the evening," he wrote.

When he went to school, his teachers always talked to him privately because he couldn't afford tuition fees. He also added he might walk barefoot in summer and wear ragged clothes in winter.

"I might have given up if I hadn't been able to get scholarships and found motivation by pasting a wall of certificates of merit I earned," he said in the thesis.

After going to high school, where tuition and surcharges were exempted and his living expenses were subsidized by kind-hearted people, Huang claimed to have caught "the glimmer of mercy that fate gave him".

From middle school in a remote mountainous area to Southwest University in Chongqing, and finally pursuing his doctoral degree in University of the Chinese Academy of Sciences in the capital of China, he said "he couldn't remember how many times he had felt overwhelmed by the burdens of life."

"But my belief has been simple. I wanted to keep studying, and get out of the mountainous area. I think it could prove I haven't lived in vain."

His dream did come true. After getting his doctorate in 2017, Huang went to work for Tencent, a leading enterprise in the internet industry, as a senior researcher in the company's AI Lab.

At the end of the acknowledgement, Huang expressed his wishes.

"I hope I can keep a young heart after years of fighting, I hope I have the chance to rediscover the world and live up to what I have suffered in my life. And I would feel it was all worthwhile if I could do something to make someone else's life better."

The Sina Weibo hashtag related to the incident has attracted more than 620 million views on the social media platform as of Monday morning. "My face is covered with tears after reading it," read one comment representing a common reaction.