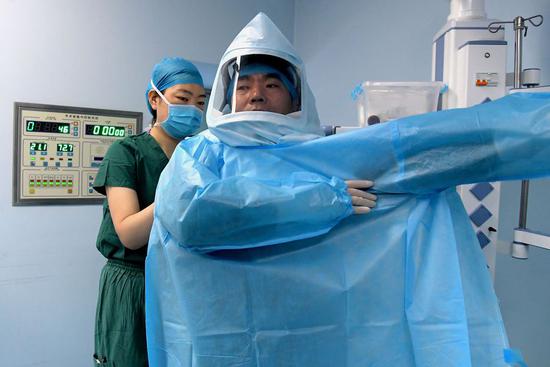 A doctor puts on a disposable operating coat before surgery before he starts to perform a surgery for an AIDS patient at Henan Infectious Disease Hospital in Zhengzhou, capital of central China's Henan Province, July 31, 2019. (Xinhua/Li An)

China has rolled out a plan for the control of HIV transmission in a bid to keep HIV/AIDS prevalence in the country at a low level.

The three-year plan, made by the National Health Commission and nine other government departments, sets a number of goals such as raising the awareness of HIV prevention and control, and educating people on avoiding or reducing unsafe sexual behaviors.

The goals also include detecting and treating as many HIV infection cases as possible, curbing the rise of HIV transmission through sexual behaviors and eliminating mother-to-child transmission.

An HIV prevention education program has been set up, focusing on enhancing individuals' awareness and strengthening the effect of education measures targeting residents, migrant populations, elderly people and groups at higher risk for HIV.

The plan also requires higher accessibility of condoms in public places such as hotels. Increased efforts should be made to crack down on law violations and crimes that may lead to HIV transmission, according to the plan.

The plan urges expanded HIV testing to detect and treat HIV-infected individuals with utmost efforts as an effective way to curb the rise of sexual transmission of HIV.