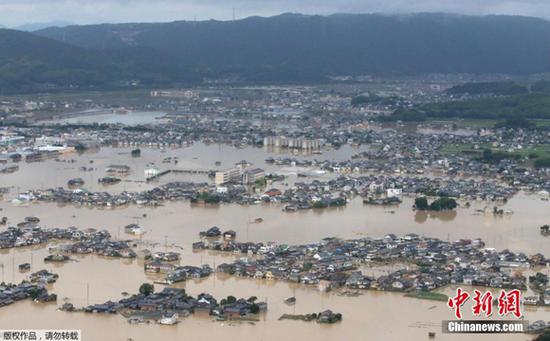 Aerial view shows houses in Okayama prefecture was in the flood. (Photo/Agencies)

According to Japan's public broadcaster NHK, 83 people have been confirmed dead, six people sustained serious injuries and the safety of at least 57 people are unaccounted for.

Of the confirmed dead, 37 were in Hiroshima prefecture which was hit hardest by the heavy rain and subsequent landslides, 22 in Ehime prefecture, while people were also reported dead in the prefectures of Fukuoka, Kyoto, Okayama, Gifu, Kochi, Shiga, Hyogo, and Yamaguchi in western and southwestern Japan, said NHK.

Of the 57 people whose safety was unaccounted for, 40 were in Hiroshima prefecture, while some 54,000 members of the police, fire departments, the Self-Defense Forces and the Japan Coast Guard have been involved in search efforts for the people trapped or wounded in landslides and flooding triggered by the heavy rain.

As of 7:00 pm local time on Sunday, 2.5 million people in 15 prefectures were still under evacuation orders.

According to Japan's Ministry of Land, Infrastructure, Transport and Tourism, as of 2:00 pm local time on Sunday, the record rain had caused land disasters such as landslides at 201 locations in 28 of Japan's 47 prefectures.

The Japan Meteorological Agency (JMA) has lifted the emergency warnings against heavy rain in all of the 11 prefectures which it had issued the warnings for, but continued to warn against subsequent disasters such as landslides and flooding.

According to the JMA, an active seasonal rain front has been causing torrential rain in most eastern and western regions of Japan since Thursday.

The agency has warned that Japan's Kinki region, which includes Kyoto, Hyogo and Osaka prefectures, could be particularly hard-hit by downpours, escalating the risk of floods, landslides, lightning and tornadoes.

Rivers from Hokkaido to Kyushu have been reported as running above flood warning levels and the weather agency has warned of further landslides possibly being triggered by the record-levels of rainfall.

Manufacturing was also hit hard by the heavy downpour and flooding, as major carmakers such as Mazda Motor Corp. and Mitsubishi Motors Corp. and manufacturer such as Panasonic Corp. suspending operations at some plants in western Japan.

Local tourism also suffered a blow, according to reports, as tourist events and hotel reservations were cancelled in areas hit by the heavy rain.

Local retailers and convenience stores in some areas of western Japan were also closed due to the bad weather.

The JMA has been urging people to stay vigilant and listen out for emergency alarms from local governments issuing advisories or calling for immediate evacuations.