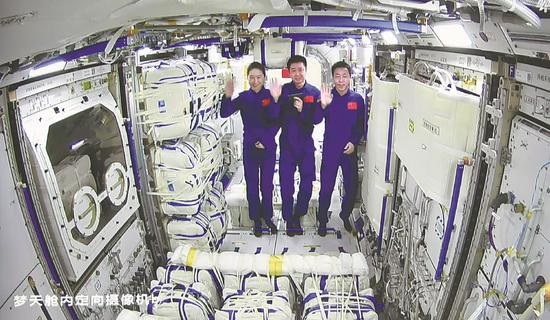 Chinese astronauts onboard the nation's Tiangong space station entered the Mengtian lab module at 3:12 pm on Thursday after the completion of the station's in-orbit assembly. (XU BU/FOR CHINA DAILY)

In a crucial, hourlong repositioning maneuver that was completed at 9:32 am Beijing time on Thursday, the Mengtian lab module was moved from one port of the space station's Tianhe core module to another port, the China Manned Space Agency said in a news release. Following the maneuver, the Tiangong station formed a T shape that will remain so for the next several years, and function checks and assessments will be carried out in the coming days.

Chen and his crew mates have been living inside Tiangong for nearly five months.

After the astronauts floated into Mengtian, Liu said in a live program on China Central Television on Thursday afternoon that she was "feeling happy and proud" about the achievement.

"I took part in the Shenzhou IX mission 10 years ago and entered the Tiangong I(experimental space station) during that flight. The Tiangong I was China's first space-based laboratory and had only one module. Ten years passed and now our 'space home' has three modules, and it is much bigger, prettier and more comfortable," she said.

"Each of us has witnessed and lived through a great decade and proudly partaken in the making of history," Liu added. "We are so proud of our great Communist Party of China and the great motherland."

In coming weeks, the Shenzhou XIV crew will welcome the arrival of the Tianzhou 5 robotic cargo ship and the Shenzhou XV manned spacecraft, which will bring another three-astronaut team to work with them in making the first in-orbit crew shift, the manned space agency said.

Wu Bing, a head structural designer of the Tiangong station at the China Academy of Space Technology, said that after the T-shaped structure was formed, all of the electricity and communication cables in the core module and the two lab components will be connected, enabling each module to provide electricity to the others and optimizing the use of the station's resources.

Wang Xiang, the Tiangong station's project manager at the academy, said the T-shaped structure promises a balance of weight and aerodynamic drag among the station's three major parts and is the best option for orbital and posture control.

Mengtian, the third major component of the Tiangong space station and its second lab module, was launched on Monday afternoon by a Long March 5B heavy-lift rocket from the Wenchang Space Launch Center in Hainan province.

The lab module is the world's largest single-body spacecraft now in active service, according to its designers at the Shanghai Academy of Spaceflight Technology.