Shenzhou XIV crew to give first lecture from space station 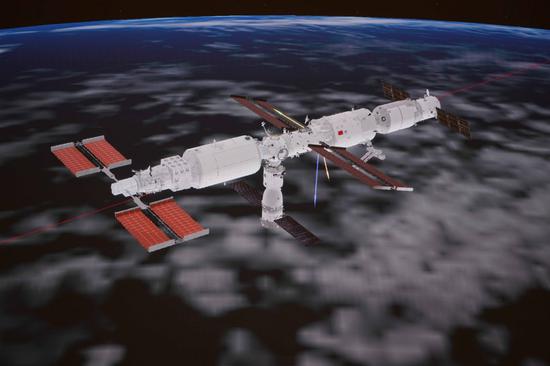 Crew members of China's Shenzhou XIV mission will give their first open lecture on Wednesday afternoon from the orbiting Tiangong space station to students around the globe, according to the China Manned Space Agency.

The agency said in a news release on Tuesday morning that the lecture will start at 3:45 pm on Wednesday and will be livestreamed worldwide by China Media Group.

The astronauts -- Senior Colonel Chen Dong, Senior Colonel Liu Yang and Senior Colonel Cai Xuzhe -- will conduct some experiments to show the physical phenomena in the unique environment inside the space station, such as the capillary phenomenon, which is associated with surface tension and results in the elevation or depression of liquids in capillaries.

They will show the audience the scientific apparatus inside the Wentian lab module that became part of the Tiangong station in July, and will also display the sampling procedures on rice and Arabidopsis thaliana, a small flowering plant from the mustard family, that grow inside a scientific cabinet, the agency noted.

Before the end of the lecture, the crew members will answer questions posed by the students.

The astronauts encourage viewers to conduct similar experiments on the ground to observe the disparities between those conducted in the space and on Earth, shared the agency.

The activity will become the third lecture of the Tiangong Class series, China's first extraterrestrial lecture series that aims to popularize space science, it said.

The Shenzhou XIV mission crews have spent more than four months inside the Tiangong station and have carried out two spacewalks. They are to stay in the station until early December, when the Shenzhou XV crew will take over.

Their peers in the Shenzhou XIII mission, who stayed in orbit from the mid-October 2021 to the mid-April this year, carried out two lectures from inside the Tiangong.