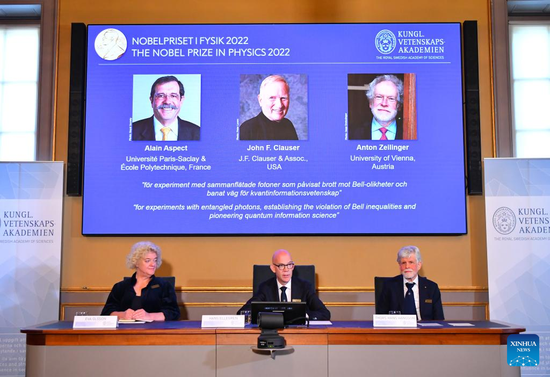 Portraits of the 2022 Nobel laureates in Physics Alain Aspect (L), John F. Clauser (C) and Anton Zeilinger are seen on a screen during the prize announcement in Stockholm, Sweden, Oct. 4, 2022. (Xinhua/Ren Pengfei)

Alain Aspect from France, John F. Clauser from the United States and Anton Zeilinger from Austria won the 2022 Nobel Prize in Physics for their work on quantum information science, the Royal Swedish Academy of Sciences announced Tuesday.

The awards were given for their "experiments with entangled photons, establishing the violation of Bell inequalities and pioneering quantum information science," the academy said in a statement.

"Their results have cleared the way for new technology based upon quantum information," it added.

"The ineffable effects of quantum mechanics are starting to find applications. There is now a large field of research that includes quantum computers, quantum networks and secure quantum encrypted communication," said the statement.

On the presentation of this year's physics prize on Tuesday, a PPT slide with Chinese Micius quantum communications satellite above sites between China and Europe was used to show an intercontinental quantum link.

Thors Hans Hansson, member of the Nobel Committee for Physics, who presented this year's laureates' achievements, told Xinhua that the reason he chose to show Chinese quantum communications satellite was because "it shows international collaboration in physics, it also shows a lot of work in this field China has done. It fits this year's prize presentation spectacularly."

Aspect, born in 1947 in France's Agen, is a professor at Paris-Saclay University. Clauser, 80, is a research physicist at J.F. Clauser and Associates in the United States. Zeilinger, 77, serves as a professor at the University of Vienna.

This year's prize amount is 10 million Swedish kronor (920,000 U.S. dollars), to be shared equally between the three laureates.