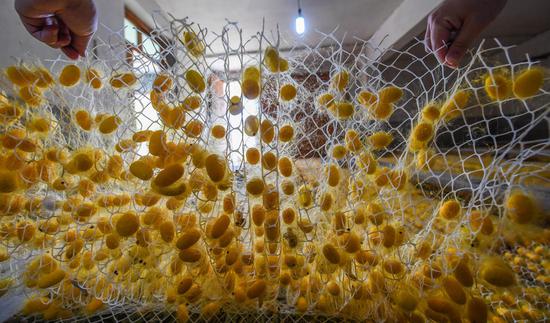 The findings were part of an article titled "A single-cell transcriptomic atlas characterizes the silk-producing organ in the silkworm," published in the journal Nature Communications in June.

After deciphering the whole genome DNA genetic code of silkworm in 2003, Professor Xu Hanfu's research team at Southwest University conducted the first ultrahigh-resolution analysis of the silkworm's silk-producing organ and its gene expression dynamics at the single-cell dimension, achieving the leapfrog advancement in research level from tissue to single cell.

During their two-year research, the team overcame technical difficulties including the mass extraction of complete silk gland samples and efficient dissociation of silk gland cells.

Silk protein is one of the natural renewable proteins with the characteristics of impressive mechanical properties, biocompatibility, and biodegradability. It is of great value in development and utilization, according to the research team.