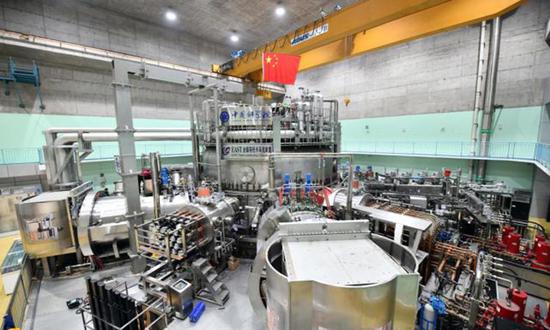 A new round of experiments for an advanced superconducting tokamak (EAST) or the "Chinese artificial sun" kicked off at the Hefei Institutes of Physical Science under the Chinese Academy of Sciences (CAS) in December, Xinhua News Agency reported on Tuesday.

The experiment is aimed at upgrading the EAST auxiliary heating system, with the goal of making the artificial sun more "hot" and "durable", Song Yuntao, vice director of the Hefei Institutes of Physical Science under CAS, said.

Since the beginning of its operation in 2006, the Chinese-designed and -developed EAST has been an open test platform for Chinese and international scientists to conduct fusion-related experiments.

The ultimate goal of EAST, is to create nuclear fusion used by the Sun, incorporating deuterium abound in the sea to provide a steady stream of clean energy.

Over the past 10 years since its establishment, a total of more than 10,000 Chinese and foreign scientific researchers have worked together to further the dream of an "artificial sun" using this large scientific device, and successively achieved major international breakthroughs.

The derivative technology of nuclear fusion research has a wide application prospects across cancer treatment, maglev trains and nuclear magnetic resonance and other applications, researches have said.

The engineering design of the next generation "artificial sun" -- Chinese Fusion Engineering Test Reactor a proposed tokamak fusion reactor has been completed, and the comprehensive research facilities for the key systems of the fusion reactor are under construction.