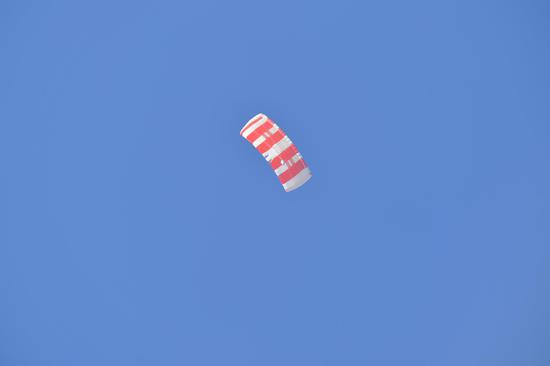 This photo shows the 300-square-meter booster parachute in the test. (Photo provided to Xinhua)

China tested a new rocket-booster parachute system during a recent launch from the southwest of the country, the China Aerospace Science and Technology Corporation said on Monday.

The system was tested on June 3 when the meteorological satellite Fengyun-4B was sent into a geostationary orbit via a Long March-3B carrier rocket from the Xichang Satellite Launch Center in Sichuan Province.

Developed by an institute under the corporation, a 300-square-meter parachute helped the rocket boosters to land in a predetermined location, narrowing the range of the landing area by 70 percent.

Unlike many countries' launch pads, which are typically located along coastlines, China's major launch sites are deep inland, which means the heavy boosters, once separated from the rockets, fly directly over densely populated areas. Therefore, after liftoff, rocket boosters and other debris threaten the safety of local communities as they fall back to the ground.

Preventing rocket boosters from landing unpredictably, in areas with human activity, has become an urgent task of Chinese scientists, bearing in mind the several space launches that the country plans for this year.

According to Zhang Yipu, a senior Long March-3 rocket designer, the new parachute system can adjust the posture and reduce the speed of falling boosters when en route to the ground, finally leading them to a targeted area.