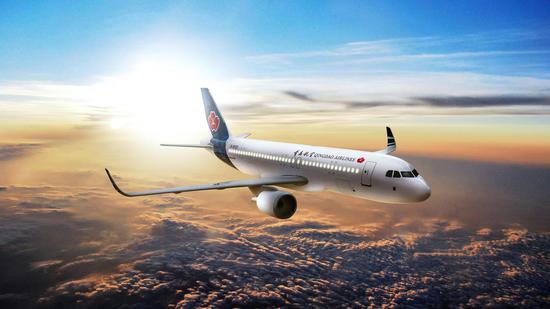 Passengers onboard the plane can get access to network service with a speed higher than 100 megabytes, which enables the same surfing experience as that on the ground.

A live broadcast was also conducted during the flight, the first of its kind in China's civil aviation history. The passengers onboard have video connected with people on the ground and shared aerial images in real time.

The satellite resource is provided by China Satellite Communications Co.,Ltd, a core professional subsidiary of China Aerospace Science and Technology Group. The company currently has 15 communication satellites in operation.

After this successful flight, the company aims to work with more airlines in the future to offer more satellite-based internet services on flights.

In the future, the company will cooperate with different players in related industries, providing ubiquitous satellite-based internet services to meet the needs of various industries such as navigation, energy, land and resource management, agriculture, fishery, emergency response, broadcasting, video, and education.