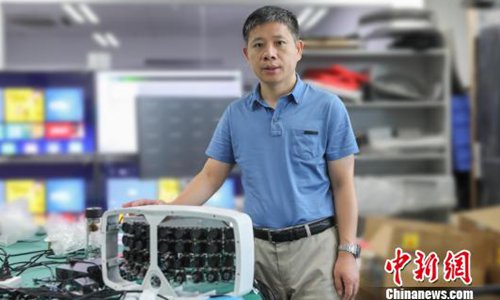 Chinese scientists have developed an artificial intelligence (AI)-enabling 500 megapixel cloud camera system able to capture thousands of faces at a stadium in perfect detail and generate their facial data for the cloud while locating a particular target in an instant.

The camera was developed by Shanghai-based Fudan University and Changchun Institute of Optics, Fine Mechanics and Physics of Chinese Academy of Sciences in Changchun, capital of Northeast China's Jilin Province, the China News Service reported on Saturday.

For example, in a stadium with tens of thousands of people, the camera can shoot a panoramic photo with a clear image of every single human face, the report said.

When integrated with AI, facial recognition, real-time monitoring and cloud computing technology, the camera can detect and identify human faces or other objects based on massive data and instantly find specific targets, according to the report.

The report said that the camera system was capable of creating videos of the same ultra-high resolution as the pictures, thanks to two special chips developed by the same team.

The massive videos and images captured by the camera can also be uploaded to a cloud data center.

People around the world could log in to obtain the data, Zeng Xiaoyang, one of the scientists in the research team, was quoted as saying by the report.

In public security, Zeng said, for example, if the police arranged the camera system in the center of Shanghai, they could monitor the distribution of crowds in real time at a management center so as to prevent accidents.

Li Daguang, a professor at the National Defense University of the People's Liberation Army in Beijing, told the Global Times on Sunday that the system could be applied to national defense, military and public security.

It could serve as a watchdog at military bases, satellite launch bases and national borders to prevent suspicious people and objects from entering or exiting, Li said.

The report did not mention which government department or agency was buying the cloud camera system.

Wang Peiji, a doctor at school of astronautics of Harbin Institute of Technology, told the Global Times that the normal surveillance public security system is already enough, noting that to establish a new system must be costly with little gains.

Zeng called for laws and regulations to standardize the application of the camera.