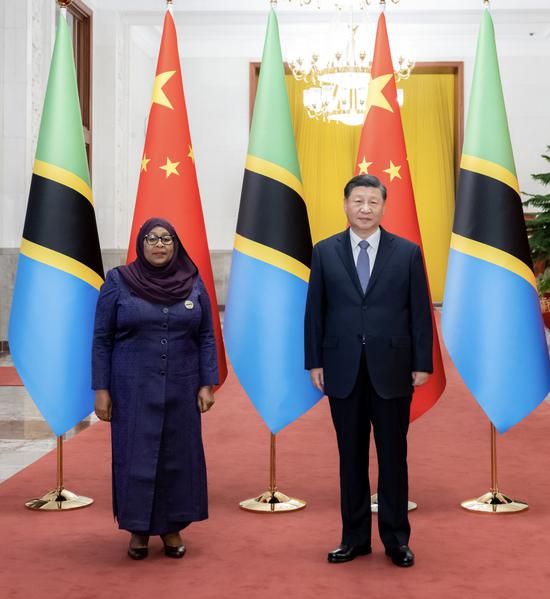 President Xi Jinping holds a welcoming ceremony for visiting Tanzanian President Samia Suluhu Hassan at the Great Hall of the People in Beijing on Thursday.(ZHAI JIANLAN/XINHUA)

China and Tanzania have upgraded their relationship to a comprehensive strategic cooperative partnership with a view to boosting all-around cooperation between them and setting an example for China-Africa relations in the new era.

President Xi Jinping and Tanzanian President Samia Suluhu Hassan — in China for a state visit — jointly announced the upgrading of the countries' ties on Thursday during talks at the Great Hall of the People in Beijing, before which Xi gave Hassan a grand welcoming ceremony.

The two presidents agreed to maintain the momentum of high-level exchanges and communication between the two countries, increase bilateral trade, jointly deepen high-quality development of the Belt and Road, advance partnership on infrastructure projects, promote the countries' industrial capacity cooperation and expand mutually beneficial cooperation in the fields of manufacturing, green development and the digital economy.

They also agreed to develop closer coordination on international and multilateral issues, strengthen communication and cooperation on major issues such as climate change and the United Nations' 2030 Agenda for Sustainable Development, and jointly uphold international fairness and justice, as well as the countries' common interests.

The two leaders witnessed the signing of a series of bilateral cooperation agreements in the fields of trade and the economy, development cooperation, the digital economy, green development and the blue economy — the sustainable use of ocean resources for economic growth, improved livelihoods and jobs, while preserving marine and coastal ecosystem health.

Hassan was the first head of state from Africa to be received by Xi following the 20th National Congress of the Communist Party of China, which elected the 20th CPC Central Committee with Xi at the core.

He said that Hassan's visit fully demonstrates the close relationship between China and Tanzania, as well as the important status of China-Africa relations in the overall situation of the country's diplomacy.

Xi recalled his state visit to Tanzania in 2013, when he proposed China's Africa policy based on the principles of "sincerity, real results, amity and good faith". He said that such principles have become the fundamental basis of unity and cooperation between China and other developing countries.

Under the new circumstances, maintaining the sound development of China-Tanzania relations not only conforms to the shared and long-term interests of both countries, but also has great relevance to advancing the building of the China-Africa community with a shared future in the new era, he added.

Xi briefed Hassan about the 20th CPC National Congress, saying that China has worked out a development path suited to its national conditions.

Saying that China has always been a reliable friend of Tanzania, Xi called on the two countries to make coordinated efforts to promote friendly cooperation in various fields.

China firmly supports Tanzania in safeguarding its national sovereignty, security and development interests and firmly supports it in exploring a development path suited to its national conditions, Xi said, adding that China is ready to work with Tanzania in supporting each other on issues related to each other's core interests and major concerns.

Xi said that the Tanzania-Zambia Railway was a testament to China-Africa friendship. He said that when China was still poor, it helped its African brothers build the railway. "Now we have developed ourselves, and we are more than happy to adhere to the principle of sincerity, real results, amity and good faith to help our African friends seek common development and build the China-Africa community with a shared future in the new era."

China-Africa relations should be promoted on the basis of mutual trust, mutual benefit, mutual learning and mutual assistance, Xi said, adding that China is willing to provide new opportunities to Africa with its own new development.

He called on Africa to actively implement the China-proposed Global Development Initiative, and said that China stands ready to work with African countries to increase the voice and representation of developing countries in global governance.

Hassan said that Tanzania regards China as its truest and most important friend and is willing to always be a trustworthy partner of China.

Tanzania will continue to give China firm support on issues related to its core interests, including the Taiwan question and those concerning the Xinjiang Uygur autonomous region and the Hong Kong Special Administrative Region, she added.

Tanzania will work with China to implement the Global Development Initiative, which is helpful in addressing the challenges the world is facing, she said.

Before Hassan's China visit, a survey released by the Britain-based YouGov-Cambridge Globalism Project found that Africans see China as a positive force. In South Africa, 61 percent of respondents said China's influence in the world is positive, while in Kenya the support for China was higher at 82 percent and, in Nigeria, it was highest out of the three, standing at 83 percent, according to the survey.

Also on Thursday, Hassan met with Premier Li Keqiang and Chairman of the Standing Committee of the National People's Congress Li Zhanshu, the nation's top legislator.