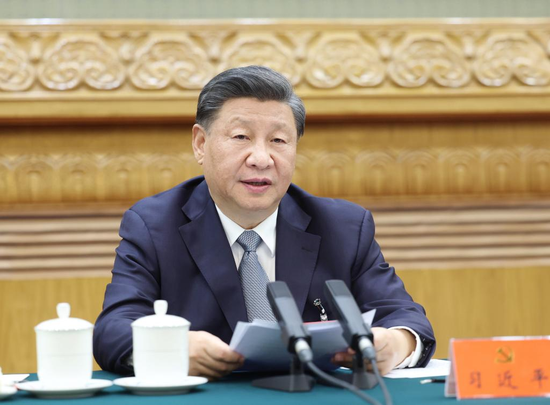 Xi Jinping delivers an important speech at the first meeting of the presidium of the 20th National Congress of the Communist Party of China (CPC) at the Great Hall of the People in Beijing, capital of China, Oct. 15, 2022. (Xinhua/Ju Peng)

The presidium of the 20th National Congress of the Communist Party of China (CPC) held its first meeting at the Great Hall of the People on the afternoon of October 15.

Xi Jinping was present and delivered an important speech.

Presided over by the congress' secretary-general Wang Huning, the meeting approved a list of the presidium's 46 members on the Standing Committee including Comrade Xi Jinping.

Xi then presided over the meeting for the following agenda. Ding Xuexiang, Chen Xi, Guo Shengkun, and Huang Kunming were approved through vote by a show of hands as deputy secretaries-general of the congress.

Also approved at the meeting was a report on the examination of delegates' qualifications by the delegate credentials committee of the 20th CPC National Congress.

According to the report, 2,296 delegates were elected from electoral units across the country, and the list had been published with the approval of the CPC Central Committee. After examination, qualifications of 2,296 delegates were confirmed valid, and they will attend the congress.

The CPC Central Committee with Comrade Xi Jinping at its core attaches great importance to the election of delegates to the 20th CPC National Congress, according to the report. Since November last year, under the strong leadership of General Secretary Xi Jinping and the CPC Central Committee, all electoral units have adhered to the Party Constitution as their fundamental principle, upheld the Party's nature and purpose, enhanced the Party's leadership throughout the whole process of the election, and fully embodied intra-party democracy. They have set strict criteria for candidates, exercised rigorous and meticulous procedures, seriously enforced electoral discipline, and done a solid job in all election-related work.

All electoral units have adhered to an electoral method that is from the bottom to the top, combining the top echelon and grassroots, through repeated deliberation and been elected level by level. They have taken into full account the views of grassroots Party organizations, delegates to Party congresses at all levels, and Party members, the report said. The election procedure has enlisted the participation of all primary-level Party organizations and about 99.5 percent of the total Party members.

Among the strict criteria set for candidates, political integrity weighs the most, and related reviews were carefully conducted. All candidates were subject to the mechanisms of Four Musts (A candidate's archive must be reviewed, personal information examined, opinion from discipline inspection and supervision departments heard, and details of reported misconduct investigated.) and Two Signs (Both secretary of the unit's Party committee or Party leading group and secretary of its Party commission for discipline inspection or director of its discipline inspection and supervision group must sign a conclusive observation to confirm that the candidate is honest and self-disciplined). Unqualified candidates were then removed in accordance with the results of public opinions and reviews. Preliminary nominees were elected at the plenary or enlarged sessions of the electoral units' Party committees or Party leading groups. Uncontested election, authorized by the CPC Central Committee, was undertaken in Tibet Autonomous Region and Xinjiang Uygur Autonomous Region. While in other places, competitive election was adopted to select delegates to the 20th CPC National Congress by nominating over 15 percent more candidates, which conformed to the requirement of the CPC Central Committee. The work on the election of delegates was publicized through various reports of major central media outlets.

The delegates elected are in general qualified for the requirements set by the CPC Central Committee, according to the report. They are outstanding Party members with strong ideological and political consciousness, and have good conduct, strong capability in discussing political affairs, and good performance on their duties. The delegates are from all walks of life and different localities, and their proportions in composition are in line with the requirements of the CPC Central Committee, and they are highly representative.

In light of the practice of the 19th CPC National Congress, the CPC Central Committee invited 83 special delegates to attend the 20th congress and they would enjoy equal rights as elected delegates, according to the report.

A draft electoral method of the 20th CPC National Congress was approved at the meeting and handed over to each delegation for deliberation.

Issues concerning non-voting participants and guests to attend the congress were also passed at the meeting. The Party Central Committee has decided to invite some leading Party officials and a group of non-CPC figures as non-voting participants to attend the congress. Such participants, totaling 354, include members and alternate members of the 19th CPC Central Committee who are not delegates to the 20th National Congress, non-delegate members of the 19th CPC Central Commission for Discipline Inspection, as well as former members of the Central Advisory Commission who are neither delegates nor specially invited delegates, among others. Also, there are 154 people who will attend the opening and closing sessions of the congress as guests. They include incumbent and former vice chairpersons of the Standing Committee of the National People's Congress (NPC) who are not CPC members, incumbent and former non-CPC vice chairpersons of the National Committee of the Chinese People's Political Consultative Conference (CPPCC), vice chairpersons of the central committees of the other political parties and the All-China Federation of Industry and Commerce, representatives of personages without party affiliation and those of religious circles, as well as non-CPC personages and religious figures who serve as NPC Standing Committee members or Standing Committee members of the CPPCC National Committee.