PLA Navy hospital ship completes 1st round of visits to islands, reefs of Xisha and Nansha 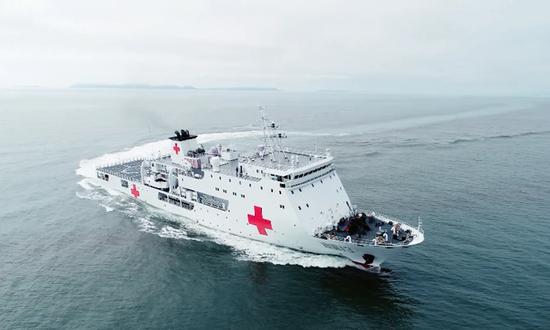 The Nanyi 13 hospital ship enters naval service at a naval port in Yongshu Reef in the South China Sea on November 30, 2020. (Photo/Screenshot from China Central Television)

The Youhao hospital ship of the Chinese People's Liberation Army (PLA) Navy recently completed its first round of visits to islands and reefs of Xisha and Nansha in the South China Sea, with analysts saying that the ship, as a routinely deployed mobile force, will serve as a key complement to local hospitals.

Having sailed for 18 days through nearly 4,000 nautical miles, the Youhao visited 13 islands and reefs of Xisha and Nansha, providing medical services to more than 5,000 people, China Central Television (CCTV) reported on Monday.

This is the first time that the Youhao has embarked on such a mission since its commissioning in November 2020, CCTV said.

More than 40 experts in multiple medical fields including critical cases and psychology from the PLA Southern Theater Command Navy First Hospital traveled with the ship, with Xisha's and Nansha's special environments including high temperatures, high humidity and high salinity in mind, the report said.

The experts on the ship also shared their knowledge and experience with medical staff members stationed on the islands and reefs as well as other vessels in the region, as they analyzed the distribution of diseases and medical needs, and provided training programs, CCTV reported.

China has built hospitals on Yongshu, Zhubi and Meiji reefs, and the routine deployment of the Youhao marks an additional mobile medical force that will fill in the gaps of medical services in Nansha's waters, building a complete rescue chain in the region, the report said.

As a key complement to the local hospitals, the hospital ship can be equipped with more types of medical equipment, Song Zhongping, a Chinese military expert and TV commentator, told the Global Times on Monday.

The Youhao also has a helipad that can host a Z-8 vessel-based search and rescue helicopter, the CCTV report showed.

"We will routinely conduct rounds of visits to islands in the South China Sea and provide medical services to military and civilian personnel, as well as fishing and commercial vessels in the region," Commander Wang Jiwu, a senior officer from the ship, was quoted as saying in a separate CCTV report.