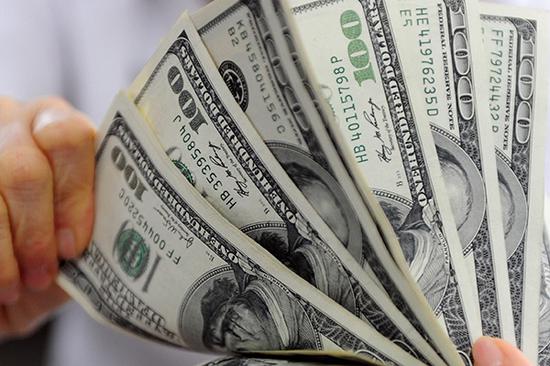 A teller counts and arranges dollar notes at an Agricultural Bank of China branch in Qionghai, Hainan province. (Photo/China Daily)

The United States central bank's unrelenting monetary tightening to rein in runaway inflation led to yet another interest rate hike on Wednesday, but it will have a limited long-term impact on China's economic prospects, thanks to the country's stable monetary policy and ongoing economic recovery, experts said on Thursday.

The US Federal Reserve approved on Wednesday a hike in its short-term borrowing rate by 0.75 percentage point to a target range of 3.75 to 4 percent, the highest level since January 2008. Wednesday's hike is the fourth of the same scale this year.

Market experts said they now expect a pause from such aggressive monetary tightening as the Fed said in its statement on Wednesday it "will take into account the cumulative tightening of monetary policy, the lags with which monetary policy affects economic activity and inflation, and economic financial developments".

Fed Chair Jerome Powell hinted that rate increases may be slowed at "the next meeting or the one after that".

Although Wednesday's Fed announcement was in line with market expectations, the US bourses slumped shortly after Powell said there is still "some way to go" before slowing the pace of tightening, adding that "the ultimate level of interest rates will be higher than previously expected". Resolve and patience are required to get inflation down, he reiterated.

But the Fed's latest interest rate spike will exert limited long-term impact on China, said Zhou Maohua, an analyst at China Everbright Bank. The Chinese market had expected US rate increases this year would be as much as 125 basis points.

Different from the Fed's previous interest rate hikes, the increases this year are concurrent with the outlook on economic recession in the US. In contrast, China's economic growth has been recovering. Its sound international balance of payments and stronger foreign exchange elasticity will mitigate the negative impact from the Fed policies, said Zhou.

The Fed's aggressive interest rate hikes have not exerted material impact on China's liquidity. Prices are also under control in China, creating an environment conducive to the implementation of the economy-stabilizing policies. As the series of Fed rate hikes grinds to its end, market sentiment in China has been quite positive, he said.

Although China has strengthened countercyclical and cross-cyclical adjustments, its overall monetary policy has been stable as People's Bank of China, the country's central bank, refrained from excessive easing. In this sense, Chinese monetary regulators still have much room to further optimize policy adjustments, he said.

Concerning the implementation of monetary policy, Dong suggested that structural tools should play a more important role while credit aggregate should increase steadily, with the overall credit structure further optimized. In this way, confidence and expectations will be further buoyed in the Chinese market and economic growth facilitated, he said.

Cui Rong, chief macroeconomic analyst for overseas markets at CITIC Securities, said he expects the US interest rate in the current cycle to settle above 5 percent ultimately and stay unchanged throughout 2023, unless the current situation results in a recession or creates an intolerable unemployment rate for the Fed.