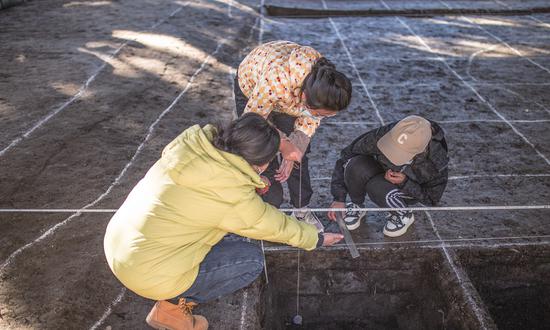 Archaeologists excavate the site of a royal rice paddy in Yuanmingyuan Park in Beijing on November 4, 2022. (Photo: Shan Jie/Global Times)

The remains of a razed royal rice field and its related buildings were discovered in the northern section of Beijing's Yuanmingyuan Park, or the Old Summer Palace, during a recent archaeological excavation, providing new materials for the study of agricultural technology and imperial garden architecture during the Qing Dynasty (1644-1911).

The ruins were found in the northwest section of Yuanmingyuan at the Danbo Ningjing (literally Simple and Calm) site. Completed in the fifth year of the Yongzheng Emperor (1727), the site is one of the 40 scenic spots in the royal garden.

Archaeologists believe the site was razed during the sacking of Yuanmingyuan in 1860 by Anglo-French allied forces during the Second Opium War (1856-60), but further study is still underway, the Global Times learned.

Starting from 2020, the Beijing Municipal Cultural Heritage Bureau has coordinated with the Beijing Institute of Archaeology, the Yuanmingyuan Management Office, the School of Archaeology and Museology of Peking University and other institutes to conduct three phases of archaeological excavations at the Danbo Ningjing site.

The main building found in the ruins used to be a great hall with a plan resembling the Chinese character tian (田), or "field."

Therefore, it has been popularly referred to as the "Tian-shaped house" or Tianzifang.

Zhang Zhonghua, a research fellow at the Beijing Institute of Archaeology, said that through three consecutive years of excavations, the foundation at the main building of the Tianzifang has been fully uncovered, allowing experts to grasp its layout, shape and the way of its construction.

There were 33 rooms, each of which was 4.48 square meters and 1.28 meters in height. The foundation site of the building was well-preserved.

Stepped stones, pillar top stone, laid bricks and a drainage ditch were found at the site.

"Some of these 33 rooms were used for storing paintings, others were used for reading, and the rest of them were used to display handicrafts," Zhang introduced, adding that each of the 33 rooms had a different function at the time.

During the excavation, it became clear that the surface of the Tianzifang's platform, patio and paths had been burned in many places. The ground was burned red and the bricks and slate were cracked. It is speculated that this was caused by the prolonged and violent fire that destroyed Yuanmingyuan in 1860.

The remnants of the rice fields were excavated on the north side. Rice phytoliths were previously found in the paddy fields by means of plant archaeology. Teachers and students from the archaeology major have been sampling the soil, which will be analyzed in the laboratory for composition and microstructure.

At present, the archaeological excavation of the Dan Bo Ning Jing site has come to an end.

This archaeological excavation work has been opened to the public. Tourists visiting the Yuanmingyuan Park can stop by the site to learn about the excavation process of this site since 2020.

In the future, Zhang hopes that this land can reproduce the scene of the rice field in the past.

The rice fields were the location where the emperor could hold ceremonies related to agriculture.

Large royal paddy fields once surrounded the Danbo Ningjing. To show respect for the role of agriculture in maintaining a healthy and stable empire, during the Qing Dynasty emperors would hold a cultivation ceremony in the paddy fields every year, as well as observe farmers at Guanjiaxuan cottage near today's Beijing Zoo.

Before the Qianlong Emperor succeeded his father the Yongzheng Emperor, he wrote an essay titled "On the Tian-shaped House" that says: "To its north lies several mu [1 mu equals 666 square meters] of rice paddies. The crops give out a pleasant scent that can be smelt from the room. My father His Majesty has attached great importance to agriculture. Though this is a place for recreation and sight-seeing, he has not for one moment forgotten about it."

Yuanmingyuan was a grand imperial garden created by and for the Qing emperors over more than 150 years ago.

The garden perfectly inherits the Chinese gardening tradition of more than three thousand years. It also draws inspiration from the western architecture style.

The garden was looted in 1860 by the Anglo-Frenchallied forces, and some of its structures were burned down. Forty years later, in 1900, the architecture's remains were destroyed again by the eight allied forces. After that the spectacular garden fell into desolate ruins.