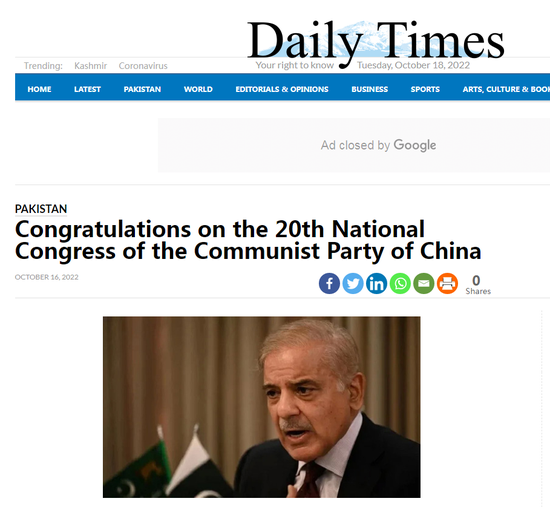 (ECNS) -- The 20th National Congress of the Communist Party of China (CPC) opened Sunday. Global media and the international community are keeping a keen eye on the congress, remarking that it would generate profound global impacts.

The world seeks out hope from the 20th CPC National Congress because what is to be hashed out and laid down as blueprints for the future of China will leave a lasting imprint on the world's geopolitical, geo-economic, and geostrategic landscapes, Pakistan Today reported on Saturday in an article named China's 20th CPC National Congress begins today amidst great hopes.

Agence France-Presse (AFP) praised China for dragging millions out of extreme poverty, sending spacecraft to the Moon and committing itself to cutting greenhouse gas emissions over the past decade.

Migrant workers have significantly increased their earnings, according to Jean-Louis Rocca, a specialist in Chinese social movements at Sciences Po in Paris, in AFP's report.

The CPC has been acting as a magnetic force for an equitable and balanced social revolution in China. It has transformed poverty into community development, which is commendable, said Dr. Mehmood-ul-Hassan Khanthe, director of the Centre for South Asia and International Studies in his article published in Pakistan Observer.

The congress will map out the national agenda for the next five years, which includes building a “great modern socialist country in all respects," Strait Times reported.

The international community and world leaders spoke highly of the CPC's remarkable achievements and its important contributions to improving the well-being of the Chinese people.

South African President Cyril Ramaphosa said he looks forward to constructive results from the congress, which will further promote the development of the CPC as it strives to achieve the goal of common prosperity, according to Xinhua News Agency.

The CPC plays a key role as the country strives to realize the great rejuvenation of the Chinese nation, Secretary-General of the League of Arab States Ahmed Aboul Gheit said, adding that he looks forward to further boosting the development of Arab-China strategic partnership and deepening bilateral cooperation in various fields.

Marcel Ciolacu, leader of the Social Democratic Party of Romania and president of the Chamber of Deputies, believes that China's future development goals set at the 20th CPC National Congress will tangibly improve the well-being of the Chinese people and safeguard world peace and stability.

Pakistan Prime Minister Muhammad Shehbaz Sharif said that the people of Pakistan deeply appreciate CPC's people-centric governance model, its success for China's socio-economic development and meaningful contribution to the evolution of the world's political and governance philosophy, adding that he is confident that the Chinese leadership, with foresight and wisdom, would chart a new road-map for the progress and prosperity of the Chinese nation during the Congress, according to Pakistan's Daily Time.