The China story behind a World Cup without Chinese players 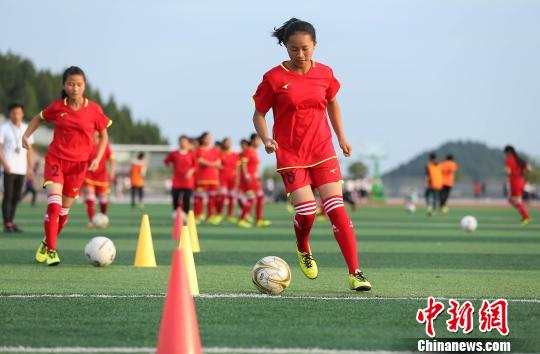 Mo Qiu, from Guizhou Province, a flag-bearer of the opening ceremony of 2018 World Cup, practices in the football field. (Photo/China News Service)

(ECNS) - Though there is no Chinese national team at the 2018 World Cup in Russia, a great variety of Chinese elements are part of the sporting event, also one of the world's biggest marketing opportunities.

Without Chinese players on the field, the World Cup will have nine foreign players who also compete in the Chinese Super League, the largest number ever. Renato Augusto, a Brazilian professional footballer, plays as a midfielder for Beijing Guoan. Javier Alejandro Mascherano of Argentina, Jose Fonte of Portugal, Axel Witsel of Belgium and John Obi Mikel of Nigeria all play for various teams in the Chinese Super League.

Compared with footballers who played in China and served for their national teams in the past World Cup, those players seem to be more competitive and powerful, an indication of the growing appeal of the Chinese Super League.

Chinese fans are also expected to be a major feature in Russia's World Cup. According to FIFA data, Chinese fans purchased 40,251 out of the 2,403,116 tickets sold, ranking ninth in the country list. Russia estimates that the number of tickets purchased by Chinese fans will reach 60,000.

According to Ctrip, China’s leading online travel service provider, hotel reservations in major cities in Russia have increased by more than 50 percent year-on-year due to the World Cup and air ticket reservations for major game cities increased by 40 percent during the match period.

Russian authorities predict about 100,000 Chinese fans will fly in to watch matches and travel during the World Cup. Moscow will also open a "China House" to welcome fans.

Chinese enterprises are also eager to undertake foreign investment and acquisitions to upgrade brands, throwing huge sums of money into World Cup sponsorships amid effort to go global, according to a report by the think-tank Center for China and Globalization.

In addition to Chinese sponsors, the World Cup has more made in China products too. A Chinese company manufactures the mascot Zabivaka and is exclusively responsible for pricing and sales in countries other than Russia. Commemorative coins for the event are made by Nanjing Mint.