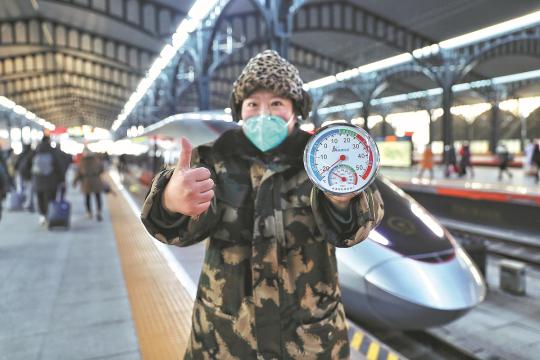 A passenger holds up a gauge showing a temperature of — 22 C at Harbin Railway Station in Heilongjiang province in front of the Fuxing CR400BF-GZ bullet train. （JIANG QI/FOR CHINA DAILY）

A Fuxing CR400BF-GZ train — the smartest and most frost-resistant bullet train model of the Fuxing family — left Harbin Railway Station at 9:30 am on Thursday for the city of Shuangyashan, starting its service in Northeast China's Heilongjiang province. The train is the first of its type to run at the highest latitude and in the coldest region in China.

A pair of these trains arrived in Harbin on Monday, and after a series of tests and no-load trial runs, began formal operations on Thursday on high-speed routes between the provincial capital and other cities in Heilongjiang, including Qiqihar, Mudanjiang and Jiamusi, according to China Railway Harbin Group.

"The trains, designed for a maximum speed of 350 kilometers per hour, are resistant to very low temperatures, ice and snow, and can run normally in conditions as cold as minus 40 C," said Xu Shoutao, deputy director of the operation workshop of the group's bullet train section. "Designers adopted a 'skirtboard design' for the equipment cabin, which can help prevent snow from entering the carriage while ensuring its ventilation function remained intact."

According to Xu, this Fuxing model also has an automatic antifreeze function. "When the train is stationary, the antifreeze function is activated successively in each carriage to ensure the safety and reliability of the braking system," he said. "In addition, the water tank, sewage tank, water pipes and other equipment are well insulated and have electric heating systems, to ensure normal operations in extremely cold weather."

The intelligent CR400BF-GZ train represents a breakthrough in China's independently developed high-speed railway technology. The model is capable of meeting the demands of high-speed rail operation under various temperature conditions, the group said.

The train boasts passenger-friendly features such as carriages with wider doors, providing better access for people in wheelchairs; barrier-free toilets for people with mobility problems; wheelchair storage areas; and signs in Braille.

On Thursday, before the debut run, the train's attendants made special preparations to welcome passengers. The carriages were decorated with the Chinese character fu, which stands for happiness, and paper-cuttings to create a joyous ambience for Spring Festival. Dumplings, candies and Spring Festival couplets were offered as gifts to passengers.

"I am taking a Fuxing train in Heilongjiang for the first time, and it is also the first time I am eating dumplings on the train," said Wang Henan, a Harbin resident on her way to her parents' home in Shuangyashan for the Spring Festival holiday.

"After the high-speed rail line between Harbin and Shuangyashan opened in late 2021, I have often taken a train to visit my parents. It is a more comfortable experience on the Fuxing train," Wang said.