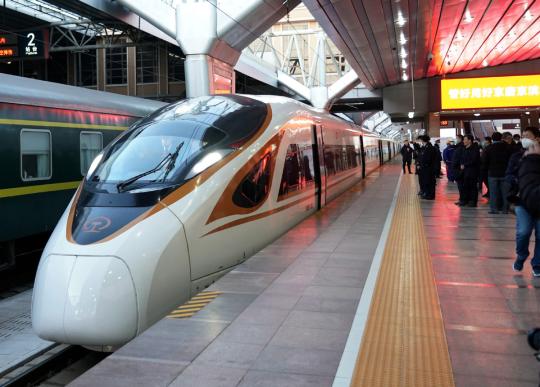 Tian Sa served as chief conductor of the first bullet train on its maiden journey on the high-speed railway. The trip was made on Dec 26, 2012, from Beijing to the economic hub of Guangzhou, capital of the southern province of Guangdong.

She remembers the "remarkable experience" clearly.

"It was extremely cold in Beijing, but as the train headed south, the temperature climbed, so we attendants took off our scarves, down jackets and sweaters one by one. When we arrived in Guangzhou, I was only wearing a suit," Tian recalled.

"I could feel the change in temperature from — 10 C in Beijing to more than 20 C in Guangzhou. I understood how the speed cut the journey time and distance, and how the high-speed railway brought people closer."

In the decade since it opened, the world's longest high-speed railway line, running 2,298 kilometers, has recorded 1.69 billion passenger trips, according to China State Railway Group, the national railway operator.

The vertical line linking northern and southern China is one of the country's main high-speed rail corridors, passing through six provincial-level regions.

With a designed speed of 300 to 350 kilometers per hour, the line slashed the rail journey between Beijing and Guangzhou from more than 40 hours to about eight.

As the backbone of China's high-speed rail network, it now links with 12 other such lines, making travel to a number of cities more convenient.

Over the course of the decade, it has become one of the country's busiest high-speed lines.

As a veteran observer of the country's high-speed rail development, she has seen great changes in the passengers' understanding.

"When the line was initially put into operation, most passengers were unfamiliar with the facilities, such as the location of the bathrooms and the business coach. Now, at least 60 to 70 percent of passengers know the services on the bullet trains and they know what to do," she said.

On Dec 26, business traveler Qi Tie took the 60-minute ride from Beijing to Shijiazhuang, capital of Hebei province. In the past decade, he has made many trips along the route and enjoyed the experience.

"The service is better and the speed is faster, which is very convenient and friendly for business passengers like myself," he said, adding that he hoped transfer services could be improved in the future.

Wang Guanwei, the train's onboard technician, said the upgrading of the bullet trains makes the trip safer, greener and more comfortable, and also showcases China's development in bullet train design and manufacturing.

Wang said the Fuxing smart trains have a mobile terminal that shows the real-time status of the pantograph, the device mounted on electric trains that collects current from overhead lines.

"I can carry the terminal to conduct inspections in compartments, so it's not limited to the monitoring room," he said. "Even if I take a nap, the terminal will vibrate if it discovers a malfunction."

For example, if a large plastic bag is found hanging on the contact wire and may cause a safety hazard for the train's operation, Wang can view a real-time image on the screen and deal with it accordingly, such as by lowering the pantograph to avoid the object or even climbing on top of the train to remove it once the train has stopped.

The design of the front of the train has also been optimized, incorporating a better curve to reduce air resistance, he said.

He noted that an upgraded air-conditioning system has been installed on the Fuxing trains, offering more accurate temperature adjustment and lower noise levels, and reducing energy consumption by 10 percent.