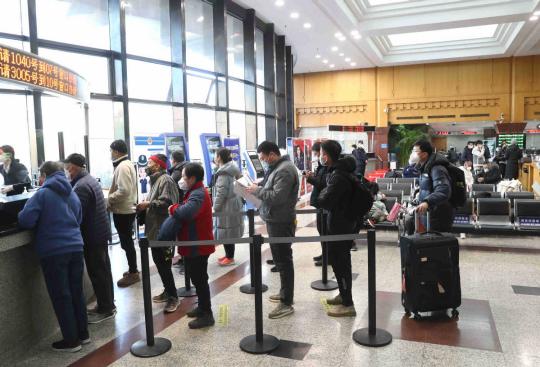 Market on course for recovery as COVID-19 restrictions lifted

Lin Mao, who works for a private outbound tourism agency in Beijing, decided to take a look at WeChat Moments on his phone just before going to bed on Dec 26.

He saw that the National Health Commission had announced that the quarantine requirement for international arrivals would be scrapped starting on Jan 8, when management of COVID-19 cases would be downgraded from Class A to Class B.

"Many celebratory posts suddenly appeared on WeChat. The comments were generally full of hope for new business opportunities," Lin said.

He welcomed the commission's announcement, as his company had struggled to remain in business for the past three years.

"Now that the market has been allowed to open, it will take some time for us to develop our tourism products. I need to find out where we stand in light of the new situation and also sort out our available overseas travel resources," Lin said.

China's outbound tourism sector is expected to bounce back as a result of the newly adjusted COVID-19 response that lifts restrictions on Chinese citizens' traveling overseas and also promotes cross-border personnel exchanges.

Reservations for outbound flights soared by 254 percent on the morning of Dec 27, compared with the same period the previous day, the online agency reported.

Countries elsewhere in Asia are expected to be among the first to benefit from the wave of travelers from China.

The agency said Singapore and Thailand are among the most popular destinations for Chinese tourists.

Fang Zeqian, an analyst at Trip.com Group, said the changed response to COVID-19 will smooth the way for cross-border travel.

"They came earlier than we expected, and my team members are thrilled," he said.

"The next step for us is to understand the meaning behind these measures, as these are high-level decisions, and we need to work with local and civil aviation authorities to get these policies implemented."

Vermeulen expects the Dutch and French authorities to hold discussions with China about resuming normal flight frequencies, which he hopes to see no later than the summer.

"Our main goal is to hopefully return to pre-pandemic status and open up direct flights from Beijing and Shanghai to Paris and Amsterdam as soon as possible," he said.