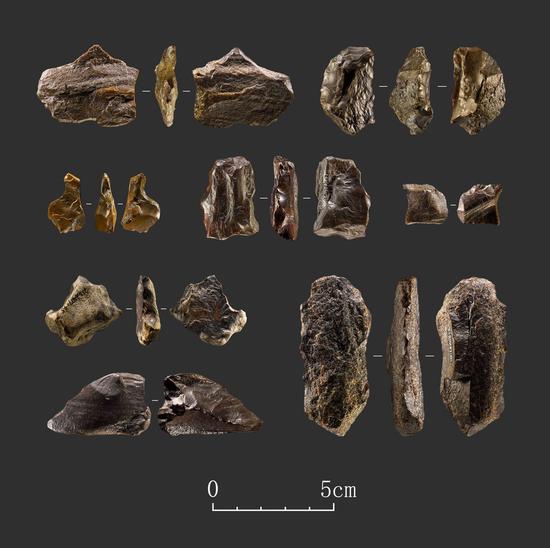 So far, more than 1,000 pieces of stoneware items and animal fossils have been unearthed at the Mengxi River site, Ziyang. The stone products include cores, blades and scrapers, while the fossils include the remains of rhinos and elephants, according to the Sichuan Provincial Cultural Relics and Archaeology Research Institute.

The findings resulted from an archaeological project, jointly launched by several organizations, including the institute and the local cultural relic departments of Ziyang, in January 2022.

Notably, some bone artifacts, suspected wood artifacts and a large number of plant remains have also been excavated -- which is extremely rare to see at Paleolithic ruins.

The carbon-14 dating method shows that the Mengxi River site is at least 43,000 years old.

It is one of the most systematic and all-element Paleolithic sites in China, showing the relationship between humans and the environment, and providing a vivid view of human activities during the Late Pleistocene, said Wang Youping, a professor of the School of Archaeology and Museology, Peking University.

"The excavation of the Mengxi River site is a start, as well as a major breakthrough in lifting the veil of 'Ziyang Man,'" said Gao Xing, a researcher from the Institute of Vertebrate Paleontology and Paleoanthropology under the Chinese Academy of Sciences.