HK will prosper from national rejuvenation 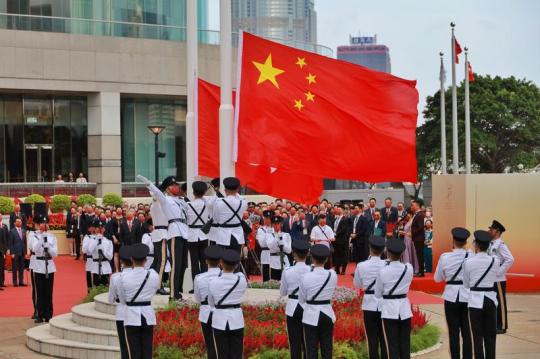 A flag-raising ceremony is held at the Golden Bauhinia Square in Wan Chai, Hong Kong, in celebration of the 73rd anniversary of the founding of the People's Republic of China, Oct 1, 2022. (ANDY CHONG / CHINA DAILY)

Newly appointed liaison office head Zheng Yanxiong spelled out in his New Year speech on Sunday a success formula for Hong Kong to achieve greater prosperity, as he stressed the unlimited opportunities for the city when it aligns its future with the country's goal of national rejuvenation.

In a video address, Zheng said he is a firm believer that Hong Kong can unleash the driving force of prosperity with the support of the country under the safeguards of "one country, two systems" in conjunction with the unremitting efforts of the city's residents.

The next five years will be critical for the country in its quest to build a modern socialist country in all respects and for Hong Kong to break new ground, he said.

Zheng said the world, by and large, has a positive outlook and expectations for China, and Chinese-style modernization is moving full steam ahead.

There are numerous opportunities for Hong Kong when it "advances in parallel with the motherland and aligns its future with the great cause of national rejuvenation".

To add impetus to its new development phase, Zheng called on Hong Kong to strive for greater international appeal as it integrates into the national development strategy.

The city should also actively participate in international cooperation and competition and strive to serve the needs of the country by leveraging its unique advantages. Zheng said these advantages include having the motherland as its staunch backer; a free, open and well-regulated business environment; a common law legal system; and a well-connected global network.

He also noted the resumption of cross-boundary travel between Hong Kong and the Chinese mainland.

The city is steering away from the whirlpool of pan-politicization, and there is now a firmer social foundation for the principle of "patriots administering Hong Kong" and a stronger consensus on the need for stability and development.

"A harmonious and stable social environment is essential to the growth of careers and businesses," Zheng said.

To forge a powerful synergy for unity and enterprise, Zheng said it is imperative for Hong Kong to cherish the hard-won social order; steadfastly uphold the constitutional order of the HKSAR laid down by the nation's Constitution and the city's Basic Law; resolutely safeguard the country's national sovereignty, security and development interests; vigorously promote mainstream values that highlight the love of the country and Hong Kong and that are in keeping with the policy of "one country, two systems".

Expressing confidence in Hong Kong's maintaining stability and seeking prosperity, Zheng pledged to lead the liaison office to perform its duties in accordance with the law; render full support to the Chief Executive and the HKSAR Government in exercising law-based governance; and join efforts with different sectors of society and residents to facilitate Hong Kong's progress in maintaining stability and seeking prosperity.

He also extended his best wishes to the people of Hong Kong for a prosperous New Year, good health, promising careers and satisfying lives.