More stretches of Great Wall to open to the public 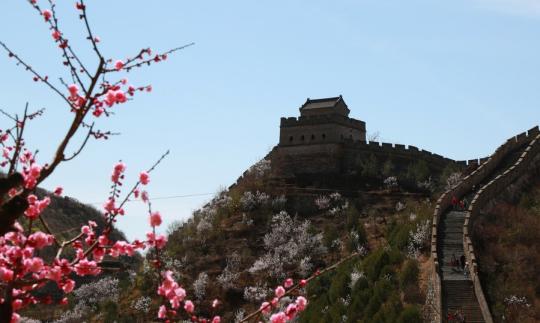 A photo shows blooming flowers on Xiangshuihu section of the Great Wall in Huairou District, Beijing, on April 3, 2021. (Photo/Xinhua)

More sections of the Great Wall of China just outside of Beijing are set to open to the public, according to a recently released plan for the Great Wall National Cultural Park.

The Beijing stretch of the Great Wall runs for 520 kilometers and features 2,356 cultural sites, and about 10 percent of them will be open to the public by 2035, the plan said.

By then, the construction of the Great Wall National Cultural Park will be complete, better protecting cultural relics and providing more tourism opportunities.

The timetable and road map for the park's construction and conservation work, which include 100 projects in five major areas, have been established, according to the plan released on Oct 23.

Liu Mei, a 42-year-old hiking enthusiast, is delighted by the plan, saying that the beauty of the Great Wall changes in various locations.

"I'm looking forward to exploring more unknown sites of the Great Wall, which are always exciting for hikers like me," she said.

The park will contribute to the ongoing protection work on the Great Wall over the past years.

A restoration project on the No 71 watchtower in Yanqing district, a landmark in the scenic area of the Badaling Great Wall, is underway with the aim of reinforcing the wall and eliminating potential safety hazards.

The watchtower stands atop a peak at the entrance to the Badaling Great Wall. Covering an area of 102 square meters, the tower provides an unparalleled view of the Great Wall's Badaling section.

It appears to be in good condition from the outside but walking into the tower, people can see cracks and crumbling mortar.

"Bushes and weeds grow all over the top of the tower, which create poor drainage. In addition, rain and snow can easily erode the wall, bringing potential safety risks," said Yu Haikuan, deputy director of the cultural heritage institute of Yanqing district.

The public will be able to access the tower after the restoration work is complete.

The Beijing Great Wall Cultural Belt and its conservation and development plan were announced in 2021.

According to the plan, Beijing is expected to ensure that the Great Wall and the surrounding environment are free from danger by 2035.

The plan will establish a mechanism for the protection of heritage through emergency rescue and daily maintenance, which will aid the preservation of the world-renowned structure.

The belt has an area of 4,929 square kilometers, accounting for around 30 percent of Beijing's urban area.

More than 40 villages and townships with approximately 680,000 people are located along the belt.

According to a survey conducted in four villages — Shixia, Mutianyu, Beigou and Yanhe — 98 percent of villagers are willing to become caretakers of the Great Wall.

Gao Chunfeng, an associate professor at Beijing University of Civil Engineering and Architecture, believes that villagers' participation is the foundation for building the Great Wall National Cultural Park.

"However, it is hard for villages and their residents to independently realize the cultural values of the Great Wall to the fullest, and so multiple social forces should join hands with them," Gao was quoted as saying by Beijing Daily.

"The developing homestay industry around the Great Wall can help to build the villages into spaces that can offer visitors cultural value, emotional resonance and memory of the national cultural park," she said.

Some villages, such as Beigou and Mutianyu, have already developed homestays around the Great Wall.