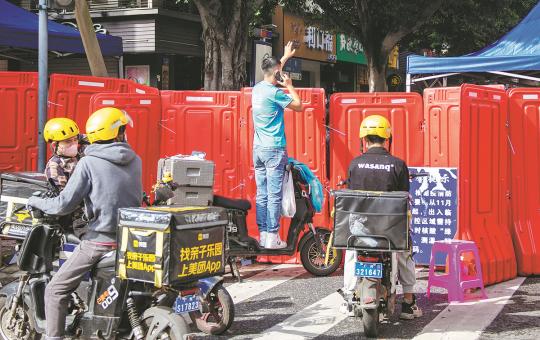 Couriers wait for customers to fetch their deliveries at an entrance of a closed-off community in Liwan district of Guangzhou, Guangdong province, Nov 9, 2022. （Photo/CHINA DAILY）

Guangzhou, Guangdong province, has further intensified its fight against COVID-19 as the number of infections remained high on Tuesday, a senior health official said on Wednesday.

In addition to Haizhu district, the epicenter of this COVID-19 outbreak in the city, stricter control measures have been implemented in the city's Liwan and Panyu districts, putting more communities and streets under closed-loop management, to help block the spread of the novel coronavirus at the community level starting on Wednesday, said Zhang Yi, deputy director of the Guangzhou health commission.

Residents in the controlled zones and in medium- and high-risk areas have been required not to go out unless absolutely necessary to limit the flow of people, Zhang said at a news conference on Wednesday.

Relevant departments will strengthen nucleic acid testing and screening in the districts where COVID-19 has hit hard in order to find infected people and block the transmission chains, said Zhang.

The operations of a large number of metro stations and bus stops have been suspended in the controlled zones as well as medium- and high-risk areas in Haizhu, Liwan, Panyu and Baiyun districts.

Zhang said Haizhu district is still the main battlefield in the city's fight against COVID-19, with new outbreak points having been reported in Liwan district on Tuesday.

She urged locals to actively cooperate with relevant departments to fight against the outbreak and strictly abide by the city's anti-COVID-19 policies and measures.

Guangzhou reported a total of 2,637 locally transmitted infections, including 2,546 asymptomatic carriers, on Tuesday. All have been sent to designated and makeshift hospitals for further medical observation and treatment.

Twenty of them were detected at the community level, indicating the transmission chains have not yet been completely blocked in the city, which has a population of about 18 million. A total of 2,442 infections were detected in Haizhu district.

Chen Xueming, deputy director of the Guangzhou Bureau of Education, said all primary and high schools and off-campus educational institutions have suspended in-person classes starting Thursday, except those in the city's Nansha, Conghua and Zengcheng districts.

Online classes have been recommended, he said.

The move aims to help avoid any outbreak on campuses, said Chen. 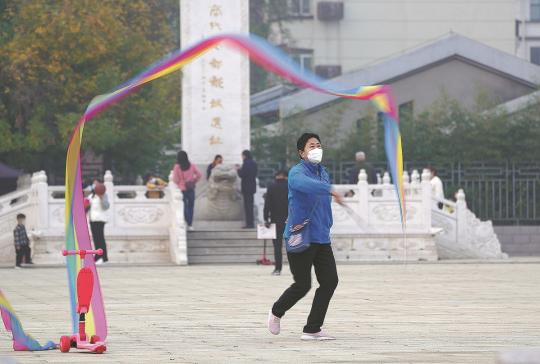 A resident exercises in a park in Zhengzhou, Henan province, on Wednesday. The city reported 159 confirmed COVID-19 cases and nearly 900 asymptomatic carriers on Tuesday. [Photo by MA JIAN/FOR CHINA DAILY]

Medical workers and volunteers have established files for pregnant women in the district and are ready to provide medical services when needed, Fu said.

Communities in low-risk areas and where all residents have tested negative since Nov 2 can return to normal, according to a notice released by the local COVID-19 prevention and control headquarters on Wednesday.

Residents can travel with a negative nucleic acid test result obtained within 24 hours and a green health code, but they should not leave the zone unless absolutely necessary.

Dine-in services have not restarted, but restaurants can offer takeout services, the notice said.

Schools and training institutions should continue to provide online teaching. Confined spaces such as gyms, pools, cinemas and chess and card rooms are not open. Group gatherings are suspended.

Businesses that provide basic daily needs such as supermarkets, fresh markets, pharmacies and barber shops can resume operating, it said.

The Apple iPhone assembly plant, the world's largest, released a recruitment advertisement on Monday, saying that new employees are needed until Feb 15 next year. It said the pay would be 30 yuan ($4.10) per hour.

Many of the plant's workers had returned home because of the outbreak, which posed challenges to production.

To encourage people to come back, it said those who resigned from Oct 10 to Nov 5 can be given a subsidy of 500 yuan if they are willing to rejoin the company.

Human resources departments in several regions in Henan are assisting the plant in recruiting employees. Registration is currently open for people who want to work there, Chinese news outlet Cls.cn reported on Tuesday. Local authorities will provide transportation, it said.